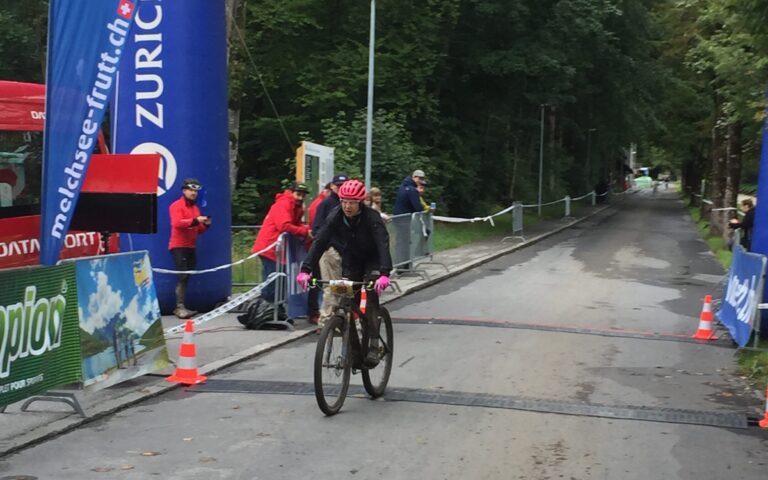 When I checked my bag again in the morning, making sure I had really packed everything, Erich cast an eye over what I was taking and commented that this wasn’t the Snow Epic and it was September, not February…

At the start number issue, they even said that it would stop raining for the start……. this wishful thinking never happened, so I started with leggings, thick rain jacket, buff and headband.

The start went quite well and initially I could ride with Sosna. I could admire her style and speed as we rode together. Lüthi was back a little and I had to let Sosna pull us along and I rode somewhere in between. When I saw that Darbeley and Lüthi were coming back at me riding together, I decided to speed up to match them. This worked out well at first but before the meadow passage, I had to let the two go. I started to freeze and get really cold in my core and had trouble turning my legs. On the downhill along with not working so hard, we had to ride practically in a stream and I got even colder and wetter, I only shuddered even more.

I was already thinking about pulling up and ending the race on the Glaubenberg. However, Erich, Fabi and Stephan stood there with a new rain jacket, Gilet and winter gloves and basically dressed me in dry kit. I couldn’t even close the zipper itself, let alone put on the gloves. I was so cold I was helpless, like a child. I started again, but I wasn’t warm, the fast departure left me shivering even more but working again would get me warm, hopefully.

Already I started to catch Darbeley, she was also at the Schlottern (she also rode with shorts and only one gilet !!!!).

Then I lost my way, because a route marker arrow or sign was missing.  When I rode down like that, my teeth were chattering and my muscles in my arms were cold and very stiff.

Throughout the downhill, I hoped they would finish the race early….but they let us continue. I wanted to stop, but Erich chased me on. I was unbelievably cold at this point…..

At least I had to kick back now and slowly I was getting a little warmer. At the refreshment stations I took to my Sponser gel, my body urgently energy as I was using so much to keep warm and ride! I struggled more badly than well up to Ächerlipass and it was finally getting warmer, so I could actually open the zipper of my rain jacket.

Finally I arrived at the top, I felt well in myself again and went on the downhill. It made things more fun as I didn’t have to shiver uncontrollably anymore. The trails were sometimes quite demanding and slippery, so I gasped in between, that I really do not „like“ this anymore, but I could ride everything!

At the bottom I still had to ride around the airfield, so I wondered when “this corner” and “that corner” would end, because the energy level was already on „reserve“. Then finally the finish appeared on my left side, but I still had to make a loop away from it until I could cross the creek to get down to the finish. I could only wish I was at the finish already and the torture could be over!

I finally made it and came to the finish line after more than 5 hours. Totally exhausted and half frozen. Colder than I had been for a long time.

Lüthi won the Swiss title – congratulations to her, I secured a podium place and silver medal! I’m very happy with my silver medal, because I really had to dig deep and earn it

For me the whole event was borderline, even if it was the same for everyone! Some had to give up the race because of the conditions and the cold. In all honesty if Erich had not chased me on the second lap, I probably would not have finished it either. This is a testament to what great support can do in helping me push through the hard times.

Importantly with this race result, I secured the overall victory of the Garmin Bike Classic early in the series due to hard work and previous results.  This is despite not needing to race for points in Einsiedeln.

This series victory means I can focus on the Marathon World Championships in Grächen (VS) which takes place on the same date! I just hope the conditions are better even though its later in the year.

My heartfelt thanks go to Erich, Fabi and Stephan, who despite the appalling weather conditions have stuck to the track and kept motivating me to keep going. THANK YOU!