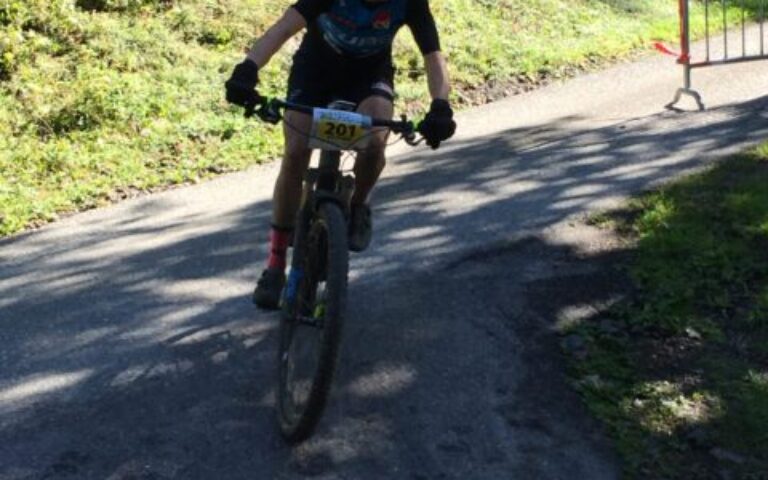 Today the Eigerbike Challenge was on the program when I left after breakfast. Looking out of the window, I could still see the stars in the sky and then as the day slowly woke up there were no worries ahead and the sky was clear.

The start was already fixed at 7.00 clock, in a new location in the marble quarry. Luckily we have it ourselves this morning. Yesterday, I looked at where the start was and checked it out, so I didn’t have to worry that I would be at the right place at the right time. Removing pre-start stress is the best way to manage the last bit of time before the off.

The course had new sections and I was very curious about what to expect but I was very much looking forward to the course.

About 12 women set off for the big round. After about 2 km down and flat, we made the final climb „to warm up“ past the finish for the first time! After that we rode up to the „red gate“ and continued towards Bussalp. Thinking back to previous years and turning into this field, the track remained the same so far.

Florence set a fast pace right from the start, but I wanted to get on my own terms. I focussed on the race and letting the leader pull, but she didn’t get away. I always kept her view 😉 up into the field. The plan being I could then open up to her and overtake, so that I could conquer the first mountain and take the prize. At this point Ariane rode in third place.

As in each previous year, it was hard for me to leave the field, I never know if I am ready for this descent. I just don’t see the line really, what is the fastest way to get over this cow meadow! I also felt cramping at this early stage of the race!! That started well then!! As soon as possible I took a Sponser Muscle Relax!!

I had only two Sponser Muscle Relax shots with me and I had not yet ridden 20 km! Anyway, Florence closed up to me again and together we rode on up to the Bort. This climb was a bit shorter now, and I stepped up the pace, because the next mountain prize was in sight. Florence did not counter. I took this this mountain prize as well. I was able to open a gap and rode on at my pace and on my terms. Initially the track went up and down and finally we turned into the ascent to the Grosse Scheidegg. I just like this climb and today I went really well up here.

Ironically, when I arrived at Grosse Scheidegg, I was almost taken off the bike by a cow. More by luck than skill, nothing bad happened and my bike survived the „cow attack“. We continued up to the ridge as usual, but instead of going from the ridge to the downhill we had to climb up to the Bachalpsee. This uphill section was still pretty tough and I was glad when it finally went downhill. Here we turned on a new section of trail and I was curious how this would be, because I had only seen a video of it.

This section had many rocks and as it had rained heavily yesterday, the rocks were wet and slippery. Not all of them could be ridden safely and unfortunately I had to dismount a few times because I did not have a free ride and I didn’t know the trail.

Nevertheless, I rode pretty well and quickly downhill. I wasn’t caught up from behind, on down to Grindelwald Grund, the other women had similar challenges on this section.

Once again, the track had been adjusted slightly. Instead of riding everything on the street, it went through the forest, that was cool, trails are always better than roads.

Now I was at the foot of the Kleine Scheidegg. Until this point, I was still on top of what happened last year … so I knew that this part of the course was still a long way from the finish. I also noticed that my energy was dipping down a bit and I was a little afraid that the convulsions and cramps would catch up with me again. I wanted to manage my energy well.

I also took a cup of Bouillion (3x) with each meal because I realized that I needed salt. I had already eaten many Sponser gels and wished I could have something different!

Shortly before the Brandegg I suddenly saw a big person, with wheels on his back, pushing his bike…. Hmmm that’s Erich! I called his name because he couldn’t see me coming. His battery on the e – bike was empty so he was head down, pushing this heavy object plus all the wheels and race spares uphill!! He stopped and held out the last bidon. Erich said he wanted to push up to the Brandegg and then traverse to wait again at the downhill if I needed more help! Thank you, sweetheart, who could ask for greater support!!

I rode on and on to Kleine Scheidegg, my feet burned, my body grew tired and weary, and in the back of my mind hope for victory grew. The course always had steep ramps to overcome. After 1:14 hours I finally reached the small Scheidegg! I took my last Sponser Muscle Relax, hoping to get the final part of the course done pretty well. Although we went down from now on, we still had to overcome three uphills before we reached Grindelwald Grund again.

The descent from the Kleine Scheidegg is very fast because it is on tar and gravel. I also think it’s a bit dangerous, because the gravel is very loose and you want to be as fast as possible, but at this stage, you are understandably tired. Concentration was paramount until the very end!

Again and again I glanced over my shoulder, because I always expected that I could still be caught, …. I had experienced this last year having been first up to Kleine Scheidegg and then overtaken by Ariane and left floundering on the trail!

Now the last climb up to the finish, this is still really hard!! Finally, after 5:29 hard fought hours, I was able to cross the finish line in good spirits. On reflection I could have backed off a little as my lead was over 10 minutes, but I rode well with a good pace focussed on the win. I took the win ahead of Ariane and Florence.

Thank you Erich for your support, which was also a good workout for you today, you also made 1400 hm!! (Some of this pushing an E-bike and race spares, remember!)

Finally, a real compliment to the Eigerbike Challenge course director. I think this years course changes are really great!!