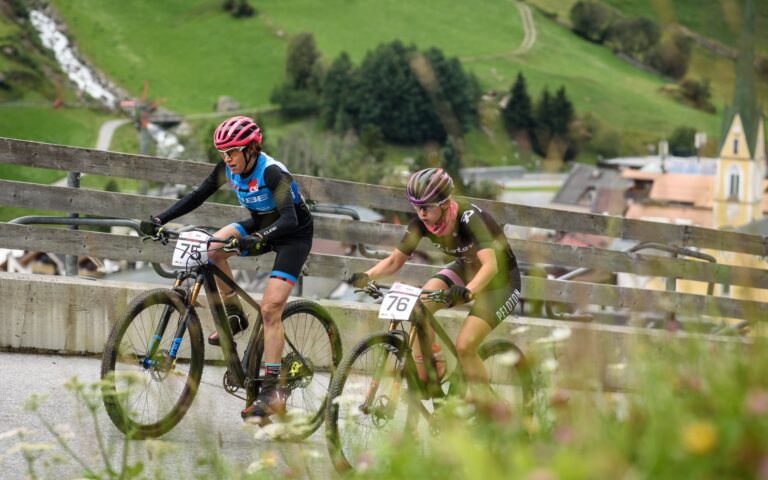 On Wednesday we drove to Ischgl, where the stage race Prologue was due to start in the evening… the first event was the individual time trial.

My start time was 17:33:20, only 20 seconds before Angelika, personally I would have preferred it if I could have started behind her and then chase.

Contrary to all „predictions“ of the first part being a flat stretch, it turned out quite differently. The start went through the village and then up a pretty steep climb. After about 1 km we went on the left side of the valley towards Mathon, this was rather „wavy“ and undulating.  Next, we rode back to Ischgl on the other side of the valley. Again we had more climbing. Even before we turned, Angelika had already caught up with me. From that point I tried to keep on her rear wheel. When I climbed, I could hold against the Polish rider and could just ride in front of her to the finish, that meant I had almost 20 seconds on her!

Angelika won the Prologue, Babsi 2nd and I took 3rd. I was happy with that knowing it was a short stage and not playing to my strengths.

Thursday was the Alpen Trophy, meaning we ride from Ischgl up to the Idalp. This was nearly 1000hm in 7.5 km. Actually, climbing which is what I do best. It went well too

and I could keep up almost to the middle station but then the disaster began! When

Angelika led the pace, I tried to go, but soon I realized that this wasn’t going to work! I had to take some speed out and let Angelika and Pintaric go.

From here I fought with the second Slovak and a Dane, who I didn’t know! It was pretty hard for me and finally even the Slovak pulled away! I fought hard and finally reached the finish in 4th place! I was pretty disappointed with this, it had not worked out and, above all, my body showed me some limits today. Irritatingly I lost a further 3 minutes!

Friday, short track, not my favourite discipline, but I wanted to try some damage control and

try to lose as little time as possible. Things went pretty well again, although I had to tear off quickly at first. This meant I was up at the highest point on the course in the leading group. I was hoping to have a bit of respite in the shallow section before tackling the next downhill.

Downhill I was fastest and caught up well. Unfortunately, the next straight was blocked with riders and I had to ride alone, especially as I didn’t know how many laps were still to go.

We rode in a large group for the first time through the finish, unfortunately, it wasn’t clear how many rounds we had to go, although it was said that we are the first over the finish line!

On to the second lap, this time I was able to keep up well, again I was fastest on the downhill. Once more we were a group of five at the finish line! Now it was only one more lap! As Pintaric tightened the pace and Angelika went along, I could not follow them, as we climbed I had nothing to match them. I could keep up with the other two but then in the downhill, the Slovak slowed me down. I found that pretty unfair but unfortunately that’s how it is!

At the end we had a sprint where I lost out and therefore placed 5th!

This time, Angelika had won!

On Saturday, next the marathon stage. In the overall classification I was 3.33 min behind the leader.  That was a big deficit! I also felt a bit tired, but hope dies last!

Immediately after the start everyone was on the gas and I had trouble keeping up. Then there was also a traffic jam when we turned off the main road on the dirt road. Pintaric moved away and Angelika left too. Next, I could not make out exactly where I was in relation to the placings. It did not matter, I had to go my pace, otherwise I would not make it over the whole distance! I drove my pace, first I had a man in front of me, who was about my tempo and that suited me. Then came the first slightly longer climb and soon could pick up and overtake a woman. I settled again and continued at my pace.

Then soon I saw Babsi and the Slovak. I got up with the two of them and could also leave the other two behind me.  I was aware however that they would catch up sooner or later. That unfortunately was the case. Galtür back to Ischgl, we were together again. I didn’t have to ride alone. I joined them and left the Slovakian to do the work.

After over an hour we were back in Ischgl and now the real race started!  When I came up the mountain it was more bad than good. Usually I can overtake in these sections, but today I had to get past so many other riders! This was not easy for my head and I fought my way through the meters climbing up the mountain. A ray of hope was that I was sure that the Slovak (in the overall classification 10 seconds in front of me) just was ahead.

I tried to set myself small goals. First up to the high stone pine, where Dädi stood to give me a bidon. In addition, Frans‘ mother fired me up there with shouts and support, mega! THANK YOU!

Next target, the Salaaserkopf, the place before it went down to Samnaun. During this section, I seriously wondered how sensible it is to race to make a photo, because I felt empty! My legs still turned, but in the smallest gears. Okay, it was already very steep but where I still got good ground last year, this year it felt like a snail battling up the mountain. The weather had turned and started to sleet, the wind was icy cold too.

I decided to ride up to Erich and then think what to do. When I started downhill, I inevitably had to go stop again. At the top I put on my headband and rain jacket. I was still lying in third place, this finally motivated me to continue riding. The downhill was icy cold and I was glad that I had stopped for something to keep warm.

Down in Samnaun things went up and down again before the climb to Alp Trida. So, next destination target Alp Trida. I stopped again to take off the jacket. Somehow, I had not stuffed it well under my gilet… when I wanted to take a gel from my back pocket, I had to stop again!

In this section I was able to overtake riders for the first time properly in this race. This motivated me a bit, but still it was very tough! Soon I was on Alp Trida, I passed the rain jacket to Erich and took a new bidon.

Next section went up to Idjoch, that was really steep again! At every pedal turn I fought my way up the mountain. Once again I could see some riders and overtake. Then the last ramp, I really wanted to get off and push, but then I saw the camera and rode on!

At the top, I got my glasses again, a bidon and then came the trail. I was really fast and could even pass riders. On the Idalp Erich stood waiting again, but I took nothing more, next, the last ascent…. kick, kick and kick …. finally I was up and now it was the last 10 km and only down.

I was looking forward to this trail, still in third place I plunged into the downhill, I really had worked hard for this and I rode down really fast. I could once again overtake some riders, who gave up their place very quickly! THANK YOU!

To the trail, then down the gravel road really fast. Then another crossing of the stream and  over the ski slope to the valley. Through the village tunnel to the village street and the last corners … I had reached the goal!

It was really a very tough fight and in the end I’m glad I made it!

Thank you all who looked after and supported me!

Congratulations to Angelika for 2nd place. Unfortunately, she could not manage to protect her lead tricot today, she defended well. A pity, but well fought!