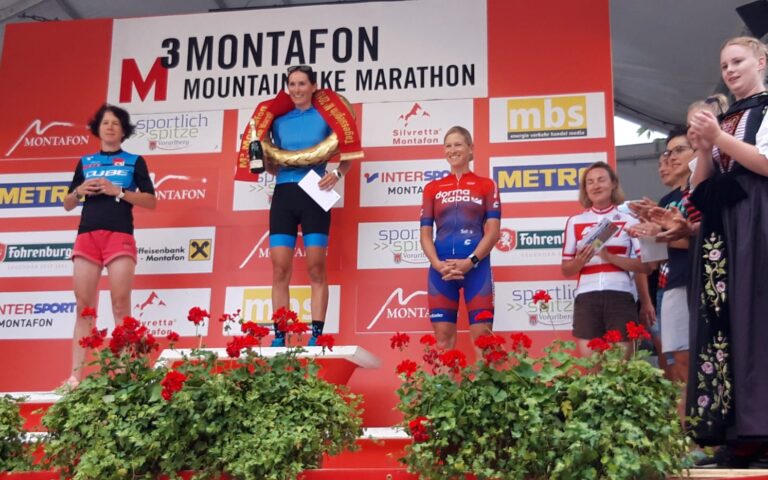 On Friday morning as part of a co-operation with the Montafon Tourist Association,  I gave a technical course with tips and training  to 6 people. They were drawn from a lottery and it was really nice to meet them.  The participants were very motivated and we rode together on the trail to the monastery. I could give the participants a lot of tips and ideas, I think we all enjoyed each other’s company and shared a good time together.

In the afternoon, Erich, Fabi, Stephan and I made our way to the E-bike pleasure tour. Initially everyone but Erich picked up an e-bike from Intersport. Man, are they HEAVY (probably heavier than me…!)

Next, to the number issue and finally to the start in the village square for the Pleasure tour.

First we went to Silbertal, where after about 5km the first stop was planned. In the restaurant there was in addition to syrup, water, apple juice a smoothie from berries and curds (quark).

The route went on to Almhütte Fellimännle, again about 5km but this time with some climbing. At Fellimännle we were served the main course, deer ragout with spaetzle and cranberries. That was also delicious.

The group went on to the „Untere Wasserstuben Alpe“ where we were offered a cheese buffet. Actually I thought that I would pass, but then there was a cheese called „Sura Kees“, which was produced here and it was so good that I hit it. Also here was a fine tea that was unsweetened. The buffet was rounded off with grapes, nuts and tomatoes.

Finally we drove on to the Panoramagasthof Kristberg, the highest point on our route, now we had to climb some height metres. Fortunately we had the support of the e-bike to get us and all we had eaten up the hill…..

After a total of 22km we reached the inn with the knowledge that afterwards it would only go down to Schruns. The clouds have become denser and it looked like rain.

Nevertheless, we sat under the umbrellas to enjoy the dessert. Fine „Kaiserschmarrn with apple sauce“. That was really delicious.

Since the first drops fell, we saddled our bikes and rode into the valley. On time with the start of the stronger rain we arrived at the campsite, and sat down in the cozy „room“ 😉 😊

I have to say, this was in the true sense of the word a Pleasure Tour and my memory for tomorrow’s race , as well as my tummy, was well filled !!

At 7.30 am the starting signal was given and we set off on the 130 km long track with 4500 hm. First, we went in a moderate climb into the Silbertal, further, we followed the same way as the day before on the pleasure tour, past the Fellimännle – this time without a stop or “E-power”. The lead group got faster and faster, so I finally had to calm down, and let Pintaric, Tazreiter and De Groot go. I knew if I went too hard now I would pay for it later!

So as in so many races I went on alone at my pace and had the others usually in sight, unless of course in one of the many curves….

I did not know exactly how big my gap was at Kristberg and the first board. When I asked Erich, he said look forward and indeed with the momentum I had, because I took the short descent, I drove straight into the group. From now on, I could keep up well. The additional loop of about 5 km which I found very long in training, went quite quickly. Particularly in the downhill sections today I felt safe and could ride away at the front. However, I did not want to ride off the front at this time.  I deliberately let them open a small gap again.

Once down in the valley, we went first on flat to Vandans, up to Latschau and back to Tschagguns. From here on the whole valley went back to Partenen. Initially we were only in a three, but since we did not ride fast, De Groot soon joined us again and our four went on to Partenen. From the toll booth, the climb began up to Kopssee, about 7 km with 800 hm rise. I found a good rhythm on the climb, but unfortunately, we only dropped Tazreiter and as a three we arrived at the top of Kopssee.

Firstly we had to cross over to Zeinisee and then down on the road to Wirl (tollbooth on the «Ischgl» side). Now it started to rain properly !! Down in Wirl I was already dripping wet so that’s why I decided to stop by Erich and put on the rain jacket. De Groot also stopped while Pintaric rode through, but soon we were up with her again because she tried to put on the gilet while riding.

Together we rode to the Bielerhöhe. Just before it started getting steeper, De Groot launched an attack and I could not counter, it just seemed like someone had pulled the plug. Pintaric, who was on my rear wheel, passed me and was able to chase De Groot. I had no chance, all the energy seemed to have left my body !! I saw the two of them move away without being able to do anything about it.

Erich, who had observed the whole thing from the street, supported me with hopp – hopp – shouts. I struggled up the rise, from the two of them, nothing could be seen. Now the decent. First along the road, then behind the Vermuntsee before we then crossed the road and rode practically vertically through a scree slope into the valley and walking trails.

At the foot passage I was able to catch up with De Groot and overtake her quickly. Next down at the food zone at the toll / Partenen,  a trail that sneaked along the slope, with many wet roots.  Not really what I wanted after 110 km, but anyway, I mastered them well.  At any rate, De Groot was still not back with me.  I arrived at the bottom of the main road, the last 20 km the whole valley awaited me again to the finish in Schruns.

So “chain right” push the big gears and full gas. The rain had stopped by now and the jacket had to go, but with as little time loss as possible!

I really gave everything I had but unfortunately I could not catch up with Pintaric, but I did secure my second place safely at the finish.

After 6:50 hours exhausted but satisfied I crossed the line. I was already expected by Fabienne, Stephan and Erich, who supported and looked after me so well.

Many thanks to all who contributed to this great week here in Montafon. Thanks also to Montafon tourism, for the great co-operation and everything they did for me. I enjoyed contributing to the channel and the tourist experience on the ride-out.

Unfortunately, the weather is not great today, but perhaps just perfect for rest with massage and wellness.