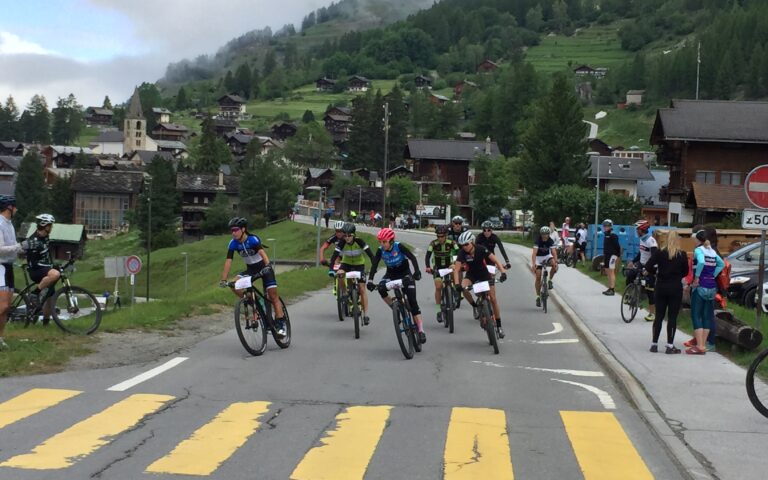 In the morning it was still pretty fresh and at 9:00 the women were called to start the 62km and 2600h race.

I reached my optimum race temperature quickly because it was not a steady pace. It was straight to the point… no messing around, we were racing from the off. There were some very strong women at the start including the Estonian champion Greete Steinburg.

After about 5km, the first descent was on quite slippery trails (the day before, there had been a decent thunderstorm and rain in the evening).

I had to get used to the terrain a little first, but then it was fine! We were a good group of 3 women, but we had no idea how far the next ones were.

On the next climb Greete pushed hard on the gas and I couldn’t follow her, I had to let her go! Now, I had a part as the third woman and found myself „alone“ on the course.

After about half of the race we passed the finish area for the first time and a short time later I was caught up by Ilona Chavaillaz! We rode together for a while, but then after the „mountain sprint“ she moved away from me! I had no chance to follow her! My legs just did not really want to spin and felt heavy. She seemed to fly up the mountain!

I tormented myself in my thoughts up the mountain and it was still 10km to the highest point! Memories of the SM 2016 on this very course were buzzing through my head, even back then I was tormenting myself up this exact climb! The kilometres were passing extremely slowly…..!

Once I even stopped to take a SPONSER gel! The climb seemed never ending! But finally, I had done it and a very cool, steep but technically challenging descent lay ahead of me!

The torture and suffering had at least paid off! I tried to enjoy the descent and ride as fast and as safe as possible. Finally, a short ascent, which on reflection in the moment seemed to be quite steep, then another steep section and more trail to the river.  Relieved, the last few kilometres were in front of me now! Since I had no idea how big my lead was, I gave everything to turn my legs and ride harder and faster…. This paid off and I finally reached the finish as 3rd overall (and 2ndin my category, 65km women!)

I’m sure I have more in mind to write, it should not be like this! What exactly it was I can only guess!

Many thanks to the organizer for the invitation and the great track! I really enjoyed the race.

Plus of course Erich, who once again cared for me on the course and prepared the bike so well!