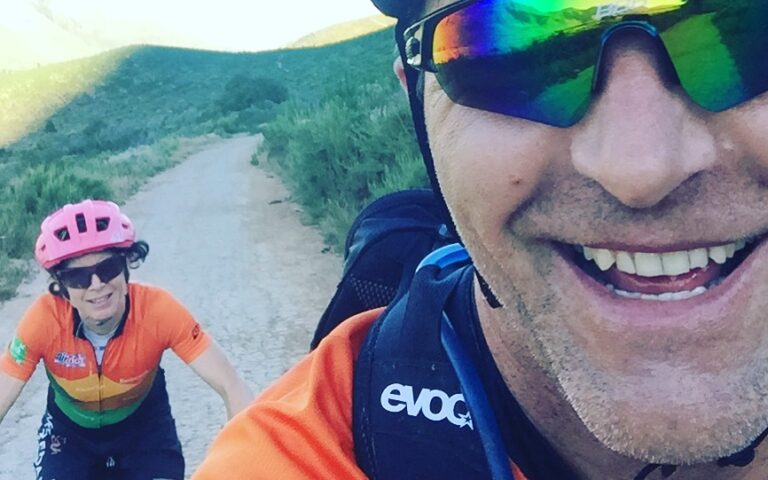 I would like to give a brief overview of our two weeks away in South Africa.

This year unfortunately, I had only 2 weeks in South Africa as a training camp and holiday. Even the arrival in the south began with a little bad conscience, the flight was at 18.30 on Friday 25thFeb so already, I had to leave a little earlier from school meeting that I would like!

In very cold weather we said goodbye to Switzerland and arrived at 30 degrees in South Africa!! Quite a change and climate shock!  As Erich had taken his e-bike, the first job was to drive to Stellenbosch, to pick up the battery at Maison! (Airlines restrict the type and size of batteries that can be taken, as well as the weight being a problem… ). Thank you for your help Maison!!

Then off to Meerendal where we were based for the first week. Even on Saturday I wanted to bike, but it then became so short a time window as it wasn’t planned. When I was about an hour on the bike, it felt I suddenly very funny, while kicking on the pedals!  When I found out finally what it was, I went the quickest way back to the hotel! It was Saturday night and the bike shops had already closed, we went in search of special 2K – adhesive. Not an easy ask in a different town with the shops closed and people settling into their weekend.

Thanks to a shout out on Facebook I could get the adhesive from @leonardboruchowitz He brought this to Meerendal and so Eric could mend my bike in the evening. Everything was ready and I was on the bike on Sunday! A massive THANK YOU to Leonard!

Sunday and Monday we were on the trails around Meerendal and Hoogekraal …. what was the coolest thing is that we could go biking together thanks to the e-bike!! It was just super mega cool!!  I enjoyed it very much with Erich being able to ride the trails together!

On Tuesday we went to Wellington and found some new trails, although two whole sections were closed! After a while it was named „Best Place“ and it went back to Meerendal. Also in Durbanville we found new restaurants and places, the city is on the move and it grows and grows!

Wednesday was declared a rest day and we made our way to Cape Town! A visit to Cape Town must be easy in all respects! We took time to stroll on the waterfront, enjoy the fine delicacies from the Food Market Hall and visit the Hand Craft Market.  Plus, to keep these great memories, strolling out in a t-shirt is simply a must after a delicious meal overlooking the busy waterfront. All this debauchery was rounded off with a walk on the beach before it was back to Meerendal.

On Thursday we went to the Delvera farm where we had a small rampage on the Simonsberg Mountains Trails! It was fun and I had two runs down „Never Ending Trail “ (which obviously did have an end, or I couldn’t have done it twice…)! It was just cool!

Friday, again the trails explored in Hoogenkraal while Erich rode around Meerendal! After that I wanted to still cover something that Saturday and Sunday. I wanted to ride the Simonsberg Contour MTB race on the Delvera farm. I approached this as a good workout without great achievement ambitions! Since I’m still not riding intervals I don’t have to be “race fit” until March. Unfortunately, I can’t ride the Cape Epic. I don’t get a „holiday“ from school anymore!  It hurts me to miss this race, but that’s life!

We also had to pack on Friday, because on Saturday we moved into Stellenbosch with Colleen and Walter on Dorpstreet!  Saturday we set off at 6 am in the morning, because the start was announced at 7:15!

So fully packed we started on Saturday morning early in the race. Like last year, in the initial phase I was in the pack and „only“ ranked 4th. Soon I was able to overtake into 3rd!  I rode to my own rhythm and came closer and closer to Jennie. I waited until I could finally pick up the pace and push on. I was a bit surprised!  So fully motivated and looking ahead I could see, just before the mountain prize….  Ariane!

Since the Mountain Prize involved a stretch that had to be completed as quickly as possible, I was able to win this even though I was still behind Ariane. What was hugely motivational was that I gained on Ariane in the downhill!  In the last climb I closed finally to her. I was not so sure what to do because I had no idea how far it was to the finish! I decided to try it so I overtook.

Now, I could lead in the single trail that took us further up to the „mountain farm” at Delvera. After that, a long trail descended. This was really good and it was scary fun to ride. Up again, it was a bit high and cramps kicked in!  What now? Invest time and take a shot of Muscle Relax from Sponser?! Or just drive on and hope that it goes well?!

I decided to take the shot and it paid off. The spasms disappeared!!  Again a few seconds lost because I was unsure whether I had missed a waymarking arrow! Fortunately everything was fine! I could see riders behind and it was now really gas gas gas so I could win the stage ahead of Ariane!  I made it! I was totally overwhelmed that I could win, because it was totally unexpected! Ariane was 2nd just over 30 seconds behind me and Jennie almost 3 minutes behind in 3rd.

On race day, Sunday it was raining and the ground was totally different to Saturday but it wasn’t really cold thankfully! This time I got along well with the start and was able to place myself behind Ariane, Jennie and Katie. I soon attacked Jennie, at that moment I wasn’t ready to follow her, but my plan was to go as calmly as possible, ride up the ascent to the „never ending trail again,“ and then to ignite the turbo there! This plan unfortunately did not work out as intended. I had settled in 2nd place and the race should finally go to this climb, there was a dramatic change!

We were directed to the short distance option, they had shortened the race due to rain!!! From thenwe were only 8km to the finish and I had no chance to overtake Jennie!! The distance was too short and Jennie too fast! I could finish in 2nd place and I did not lose much time to take the overall victory for on that second day. I was super HAPPY!! What a start to the new season!

On Monday I was pleased to be there with Nick and Kim of @iloveboobies_za at Borman’s Winery. The day was focused on raising awareness of breast cancer and preventative action. This was very impressive to see what these two women have already achieved with their commitment to breast cancer and its enlightenment in the people of South Africa! I am immensely proud to be an Ambassador of #iloveboobies_za !! On the way, we took in the race at Fairtree Simonsberg in the MTB Contour colors (Tricots) of #iloveboobies_za !!

After that Erich and I were still biking in Rebookkloof in Paarl, since it was over 40 degrees!!

On Tuesday we finally found our way to Jonkershoeks in Stellenbosch! Erich was pleased that for the first time that he could ride all the way up. We rode Amegendon Trail, the Phoenix and the Fire Hut!! Also, on this day it was getting very hot, even though we were on the road before 8am.

On Wednesday, the Bottelary trails at Asara Farm were on the program and on Thursday Jonkershoeks again! Because of the heat we started earlier every day!  However it was still hot, but I love that! (At home, Switzerland was very cold and snowy…)

We also met up with long time friends from SA and the time has just gone like that!

Friday and our last day had dawned. Our plan to go for about 1.5 hours on the bikes before breakfast, didn’t work out quite as planned!

We wanted to nail the G-spot today! (Innuendo klaxon..) I felt a little tired and asked Erich if it would be a good idea to do the G-Spot with its many jumps! He said we should not exaggerate our ability and be careful!  We loved it, rode the G-Spot twice, then rode over the trails over to the university.

Erich still wanted to clear the classic „winebarrel“ … a section of the WC track. When we were up there we had to pump for the 3rdtime today!!  The whole 2 weeks we had no flats and already the third time today and no sign it might be over!!!  Anyway, I decided not to ride down! Erich said but he could and he did it last year. I asked him again, do you really want to ride it?!  An emphatic YES! … he would also been wiser to say “pass”  because he actually fell!  He slapped his knee so hard that we had to make a detour to the hospital! Winebarrel 1 – Erich 1.

After Erich had been „patched up” it was back to the Dorpstreet where we received a fine breakfast before packing and went via Meerendal on the way home to Switzerland!

We had two really great weeks and I have very much enjoyed riding with Erich biking every day! Makes everything much more fun!! It was a cool idea to give him an e-bike!  With warmth and good feelings in our hearts, we are now back in the cold and wet!! But these two weeks will remain long in the memory and already we begin to look forward to the next time in SA, it’s just been like 2nd home!!

It hurts already that I can’t ride the Cape Epic!!  I really wanted to ride and finish to make it into the 10 Times category. 10 times I’m already down there, but have “finished“ only 9 times!  I had to give up due to illness and incidents once!!

So now I wish you all a great time and see you soon here! 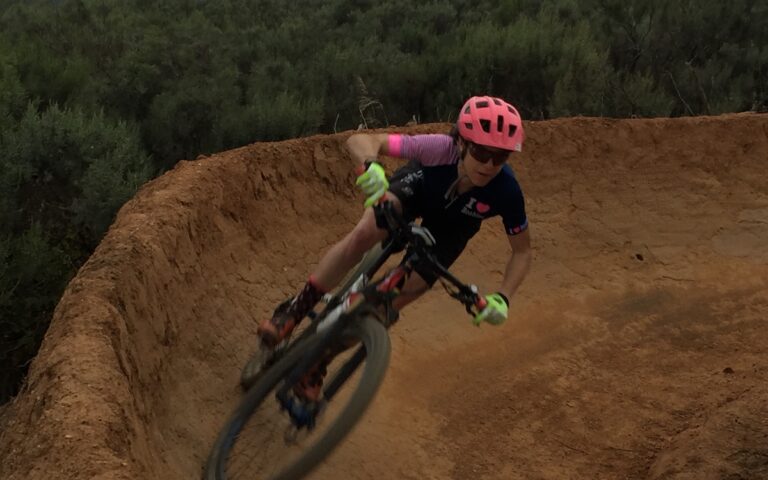