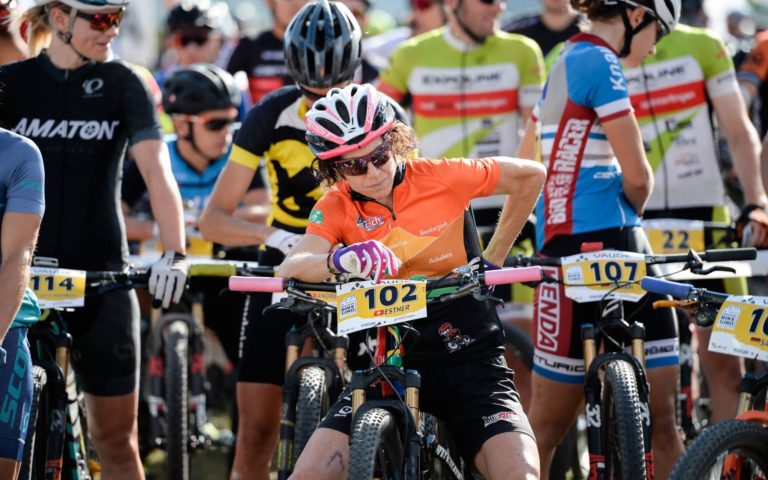 Looking back, these were 3 exciting, hard but wonderful days at the Engadine Bike Giro.

As Doris taught TW again for me in school, I was able to travel to Engadine on Wednesday afternoon. That was also good, because driving by myself with the caravan over the Julier pass brought me out in a bit of a sweat. Everything went smoothly, I arrived in the evening at the campsite by the Olympic Ski Jump site in St. Moritz. Next was getting things set up which still took some time! But finally, I had done that too!

On Thursday I went „Bähnle,” meaning I covered the climbs by train and could enjoy the cool trails !!

On Friday, it all started, and the weather was now much friendlier than on Thursday. My start time was 13:17:00. The race started in 15” intervals and Sabine Spitz started right behind me. This stressed me a little and I started the race a bit too fast. I quickly caught caught up with the riders in front of me, but unfortunately I soon realized that I had trouble breathing and my pulse did not come down. I switched down a gear and let Spitz also pull Darbellay through. This frustrated me a bit, of course, because I had already chances to compete against with Spitz. Protecting myself for later, she shot past me with a pace that I could only dream of at that moment.

So once more I rode at my own pace and tried to progress as consistently as possible. Despite my „bad“ day, I was able to overtake one or two riders. When I finally arrived on top of the Corviglia, I was really looking forward to the downhill on the Olympia Flow Trail to Chantarella, from there it was still about 800m up to the finish.

I got into the downhill flow trail really well and was able to catch up with Darbellay !! I threw all my reserves on the pedals and was able to win the „sprint“ to the line. With the 15″ I started after her, I finally lead her by 19″. With that time, I was able to secure 3rd place, but the gap to Spitz was huge at 4m:40s and 3m:51s behind Morath.  That was a little frustrating but I had given what I could and there was nothing left in my legs today!

The second day was a little different with a mass start. I decided to try and pace Spitz and adapt to her approach as she is very experienced. The start is like a lot of the marathon bike races, a little hectic and potentially risky so I held back a little. On top of all this craziness, it was dusty on the Silvaplanasee and clear vision was difficult as well.

So, we started the first climb through Surlej up to Lej Zuppo on the Olympic hill towards Mortarasch. To my pleasant surprise, I was able to keep the pace up and felt pretty good, but I was mindful of not getting drawn into riding too fast. The three of us (Morath, Spitz and me) rode together almost to Bever, when suddenly Darbellay came from behind. We were all a bit surprised, but she seemed to have made a good „move“ and was able to catch up with us in the group riding with the men.

We were actually thinking that this wouldn’t be allowed (we were all riding „alone“ after all!) She rode to Bever with us, but already on the climb towards Samaden she faded a little. Morath attacked and was able to open a small gap, but I remained focussed on my original goal and remained on Spitz’s rear wheel. Pressing on we went up together to Alp Muntasch. From there on the trail towards Alp Marguns, Morath was able to increase her lead gradually. Then in the short downhill down to Alp Marguns, we practically caught her. Next, the final part of the climb up to the Glüna valley station. This section had it all, because every ramp that came was a bit steeper than the ones already ridden !!

I sensed my chance to attack. I increased my pace and in fact, Spitz couldn’t match me. In addition, I closed to Morath! My fighting spirit was fired up and I really wanted the stage win. There was 20km now to the finish. I overtook Morath and opened a small gap. My next goal was to be first into the Olympia Flow Trail. I managed this and completely focussed I flew down the trail and closed to the men in front of me. They made a fast place and I came back into this flow like the day before. Nevertheless, I noticed the tiredness and was happy when I finished this section without falling. Next, a climb of about 3km. I once again rallied all my powers and even took the flow into this climb.

When I finally overtook leaders like Schnider and Baumann, there was no stopping them. Arriving at Alp Suvretta we went into the Foppettas Trail, again, full concentration was needed, but it was just great fun! Once in Champfer, we had to take a little detour. I rode everything in front with Baumann in my slipstream, but it was okay.

I could actually win this stage !! I was just overjoyed, because after the first day I hadn’t expected it.

I was even so fast that I caught up to within 2m:15s of Morath, who took the leaders jersey from Spitz. Plus as a bonus, Spitz’s lead of 4m:40s of from the first day melted to 50″

On Saturday, Erich and Chrigel arrived and we had a great BBQ evening together. Since both Erich and myself were cold, I didn’t sleep well and on top of this, either Erich or myself were coughing…..

Before that happened, first was the Maloja Pass. Again, along the Silvaplanasee, again dusty, again hectic and risky.  After only a few hundred meters riders got tangled up and a terrible crash in the field brought people down. Due to this and the avoiding action, I had to close a gap to Spitz and Morath, but in the climb up to Alp Prasüra we reformed our group of 3. The difference here was that Morath was absolutely not involved in the leadership work on the constant up and down through the Val Fex, Alp Isola and back down to Lake Malo. From there we went back over Isola, Sils to Silvaplana, ticking off 25k. With that done, it’s on to the second round 😉

Passing Lej Zuppo and the Olympic ski jump, we made our way up to the Hotel Salastrains. On the way I explained to the two Germans who the Schälleursli is 😉 Interestingly I had enough puff left for talking 😉 From the Alp Giop this changed abruptly. Spitz was at the even steeper ramps where I had actually planned for my attack, the tempo irritated, I couldn’t push on well. Even Morath couldn’t connect to us again. But while she was able to ride the ramps, I had to hop off twice, I just didn’t have the power to push my smallest gear and the gap slowly increased in size. On top of this, I felt signs of cramping and I really REALLY didn’t need that right now! I wondered if I would tolerate Sponser’s “Muscle Relax”, I did not want to risk pausing because of muscle spasms………I took it and it worked well but unfortunately, I did not get any faster but at least I could continue! I still held on to the hope I could catch Morath up in Val Suvretta.

I was very relieved to arrive at the Suvretta pass and was looking forward to cracking on after this. I didn’t ride badly, but Morath must have done well, because I couldn’t catch her !! On Alp Suvretta I saw her again, always in front of me, but unfortunately, I couldn’t get closer in the climb to Via Engadina as expected. Frustratingly, I had to hop off the bike again (it annoyed me!). I pushed a section until I ride again. Finally the last downhill, which was really cool, but probably too short, as it was not enough to catch Morath. Over the line and no change, I finished the final day holding 3rd place.

The final result was 3rdplace overall and no one can say that it wasn’t an exciting race. Spitz had taken the leaders jersey with victory after the third stage.

Many thanks to all who contributed to this SUPER cool event. The organizers of VAUDE Engadin Bike Giro with all their helpers.

Also, the team VAUDE Centurion, which gave me food !!