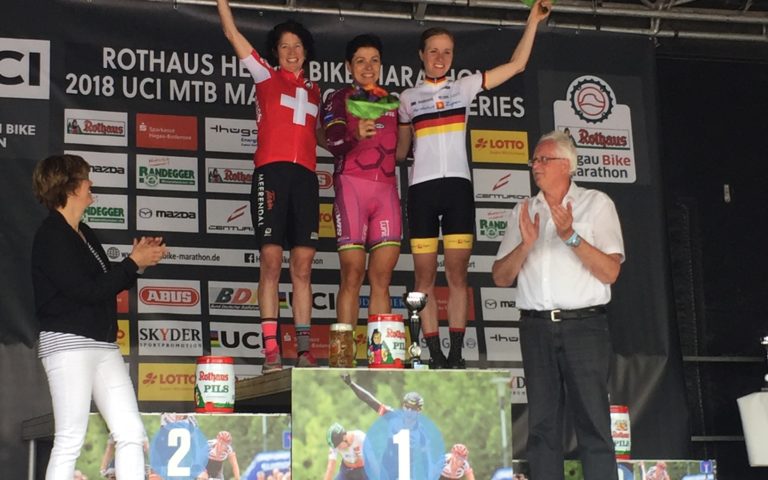 Once again, the marathon in Singen had come around on the calendar …. so, we drove with the caravan to the competition. We wanted to make our camp on the official „camper place“ right at the Town Hall Square. We had everything almost complete for the second time (the first time we had to „reposition“ because the power cord didn’t reach… then an official cameand told us that it would not be allowed to be on this pitch it was only for campers with tents !!

Since we did not want to get involved in a long and pointless discussion, we packed up and went to the „official“ camp designated by the organizer team.

After a short lap with my new bike, we concentrated and prepared everything for the race on Sunday. The weather forecast was not exactly intoxicating, being a mix of clouds, rain and heavy rain.

But then in the morning, the weather was still amazingly good, even blue sky and sun I could see the course clearly. What to wear to cover all eventualities was the question.

After all was sorted, we could still start in good weather with Spitz, Ulrich (German champion) and other fast women, the field was pretty well taken up.

We first had to complete the small lap (31km) and then the big lap (49km) … in the beginning to line up was based on scoring, so Spitz ahead and we others lined up behind her. The pace in the first lap not very quick, so that after 31km we were still a big group. Then in the second lap, we increased the pace at each of the ascents and slowly the group disintegrated and fell behind more and more.

During the long climb we increased the pace a bit and extended a few meters, but we were not consistent enough and Ulrich was able to catch up with us again. But after being caught she always drove rode behind. She said, we should make the podium between us, she just wanted to be 3rd. I didn’t trust that statement and did not quite know how to respond to it.

So we continued together ….. about 10km before the finish I decided to go to the front and increase the pace. So, I rode in this lap again as the first in the trail and was able to control the pace effectively. Then the last section before it went under the highway through the last climb I was still in front, Spitz on my wheel and Ulrich had been dropped, she let us go.

Then the closing kilometers … I said to Spitz, if she did not want to save something for next week (the WC in Albstadt). Well, apparently not was the replyso we went on together.  Sometimes I was in front, sometimes she was as we raced for the line …
Unfortunately Spitz finished the race first and won by a small margin, I had to finish in 2nd place but still on the podium.