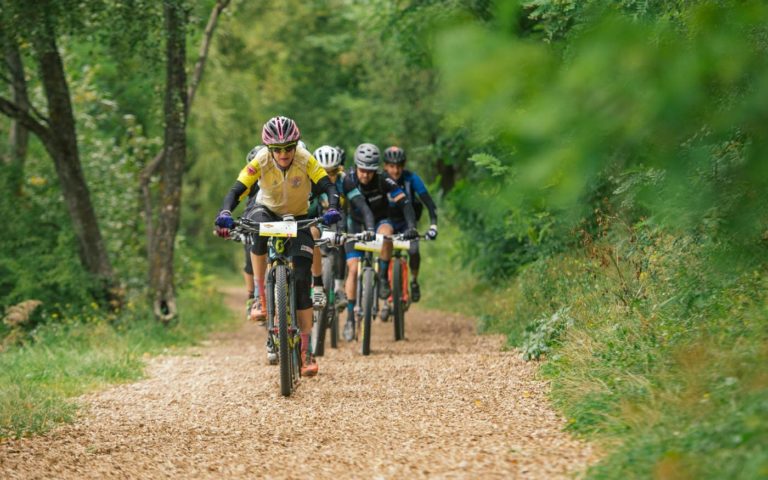 Today, we were proud to start in the Yellow Leader Jersey, the first time that I can wear this at the Swiss Epic. This is additional welcome motivation to bring to the start line. Today was a relatively easy start time of 9am so I had a lot of time in the morning…

So we start… first a small descent on the road before we are released to race in the climb to Albinen. We soon opened a gap between Lüthi / Pirard, settling into a good rhythm. After another 6k the trail descended sharply for the first time and we were overtaken. They pushed too hard and risked too much and we passed them once again. Pirard had fallen, fortunately nothing else happened and they were already attacking us again and managed to pass once more.

Back on the road, we managed to close the gap and catch them, overtaking to lead the womens field.

After this section the trail undulated through the vineyards, along the Suonen and finally, down to the valley to follow the river. We crossed to the other side and went straight up the next long climb. On the section by the river we were a large group, now including Hug and Darbellay. Unfortunately, no one wanted to share the work so Jennie and I dug in and set the pace. After the first feed zone, we decided to increase the tempo and climb hard off the ascent.

Finally, the downhill to the Suspension Bridge or Hängebrücke. This was a very special feeling and not easy at all. It was tight, high, exposed and wobbly. Crossing the bridge was a mandatory walking section with a live facebook interview for added measure at the end! We didn’t realise until after the race but we lost over 3 minutes here.

Off the bridge, we went into the second part of the climb followed by a very cool technical trail to return to the valley bottom. We continued on to Susten and Leuk. Just before we went down to the river, I glanced back…. Luthi / Pirard were closing on us… not what I wanted to see at all !

I was really shocked. How did we loose so much time? Were they really so much stronger? To respond, I stepped up the pace and tried to conserve energy for the last long climb to Albinen!

We rode together through the last Feed Zone and to the bottom of the climb. We tried to keep the pace up and as a result, were able to open up a gap from them on the ascent. It was time to dig in together and try to gain as much time during the climb as possible. It looked like the race would be going to the wire.

The asphalt climb was broken by a short piece of singletrail which rebelled against our efforts, but we cracked it without being caught by the chasing pair. More Asphalt, then turned to gravel which really didn’t roll easily and we needed more strength. I was always thinking “every metre gained was a metre for us”. I adapted to Jennies pace, but made sure that we didn’t slow down !

Another trail with 5k to the finish.. we could make some ground I thought. But it was another rise needing us to fight for every second. Only a few hundred yards but I pushed Jennie like nothing else, she was really fighting ! Finally, downhill on the section we had already covered earlier today. Riding at speed this close to the finish line needed care, it was raining and the tarmac was wet. Then the last uphill turns, the last singletrail to Leukerbad, the last kilometre… FIGHT FIGHT FIGHT !

We could take the Stage win and keep the Yellow Leader Jersey which was SUPER COOL!!!

It will be harder in the next days racing but we will fight to keep the Leader Jersey !!