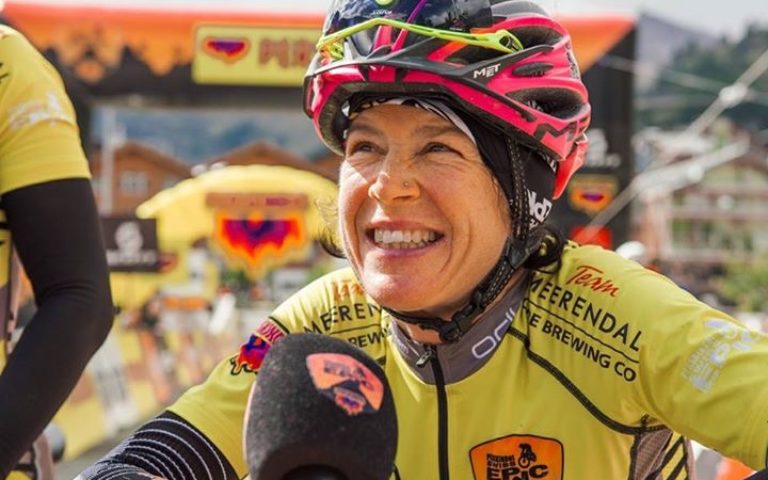 The first challenge of the day was to choose the correct kit for the conditions. The weather was bright and fine but bitterly cold about 2 degrees. After an initial climb to Albinen and getting warm, there was a long potentially cooling descent to the valley floor. In the end, I settled for ¾ bibs, an additional long sleeved top and thick gloves. Decision made.

Jennie started quickly today, I had some difficulty breathing in the cold air. Despite this we started well, leading the field. Unfortunately we couldn’t hold this position on the downhills, we were overtaken by Lüthi / Pirard. We didn’t let this stress us and we did our best to ride down without incident, as quickly as possible!

Unfortunately we were alone on this section and had to work a lot. We changed the leadership and between the two of us, managed the load well. This paid off and at the 20km mark we went into the first long climb……… we could see Lüthi / Pirard ahead. We were motivated, set a good pace without pushing too hard. Zermatt was still a long way ahead.

Working like this, we were able to close the gap and place ourselves back in the lead. With our pace, we covered ground quickly. More time on trails then back on the road, climbing, only interrupted by two longer descents. We reached the highest point of the day after 45km, now the descent to the valley.

This was a really long descent and we tried to cover this as quickly as possible. Every kilometre was closer to the foot of the hill and we were hoping that Lüthi / Pirard wouldn’t close the gap and catch us.

Unfortunately, we just couldn’t make it and very close to the end, we had to let them pass. We rode as the second women’s team through the Feed Zone, still 25km from the finish.

From here, it was up the valley to Zermatt, a long way!! Soon, we were able to retake the lead but we had to fight to keep it. The gradient here didn’t work for me, it was too flat! I want to climb! Jennie and I worked well together and shared the work well, pressing on for Zermatt. For me, this is a really difficult stage in my head. Making ground ascending, then loosing it again on the downhills.

Finally in a time of 5h 7m 6s we crossed the line in Zermatt, taking the stage win. Also importantly, adding another 2m 40s margin to the second placed team.

So, on to the next and final Stage. Lets hope that everything will run smoothly and we can hold on to the leaders Yellow Jersey after the finish.