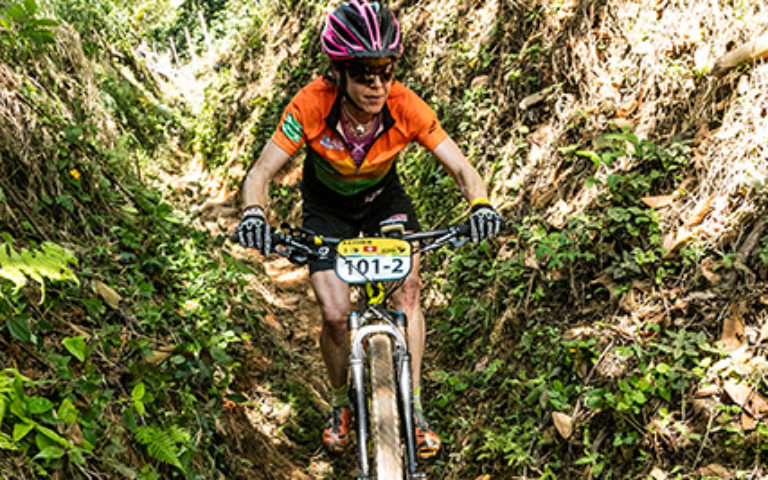 After the frustration yesterday in the XCO race after we were given a 60-minute penalty, I didn’t feel part of the race today which didn’t make the stage easier! 🙄 Shortly after the start we had to go up the mega-steep ramp we descended two days ago, so we practically drove ͞cold͟ into this climb!😳 I looked left and could see how Catherine was attacking this climb, so I had no option but to stick with her. It was BRUTAL!

But… we were able to get away from Sonya and Amy on this climb. 🚲💨 Our goal for the day was to win the“Queen of the Mountain“ 👸Jersey……Because, in reality, an overall win was far away after the 60minute penalty, when we cleared the ramp it was a bit more relaxed. I also realised Catherine was putting more into each pedal stroke than in the last days.😉 She also said that it was easier to ride without the pressure of taking the overall win.

It was harder for me because I was simply not mentally prepared. 😬 But, she was really up for the „Queen of the Mountain“ jersey, so she shouldn’t be denied because of me !!! It was a really tough day, the climbs were long and drawn out, not exactly my strength and on top of this, we had a headwind. I tried to distract myself by admiring the landscape and ignoring the bike computer as much as possible as the climb to the top was more than 50km!! 😳😜 We kept our place, managed the distance to the team in front and made sure that we were not overtaken. After 26km, we stopped, filled our bidons and continued on the undulating course. Was the air getting thinner? It was over 3500m now…. Past horses, cows and workmen, we finally made the top of the mountain….😅👍 Now the descent but this was no recovery…. It was rough and shook us up. It was so rough I wasn’t sure if my suspension was unlocked, my whole body was aching.😬 On the up side, the descent was cool and fast which means kilometres covered… it was a real joy ! After 20km, the counter attacks came and the hard work started, but on a positive, the scenery was amazing. It seemed we were riding through the jungle and it was a shame we couldn’t appreciate the huge leaves, butterflies and coloured birds properly. Finally, we crossed the line after just under 5 hours. Today, there was no rice, pasta or chicken, but….. burrito’s and hamburgers 👍😃! After we had eaten and collected enough bikers to fill a car, we were off to the hotel and a beautiful spa…. Now it’s time to relax and a new morning!!