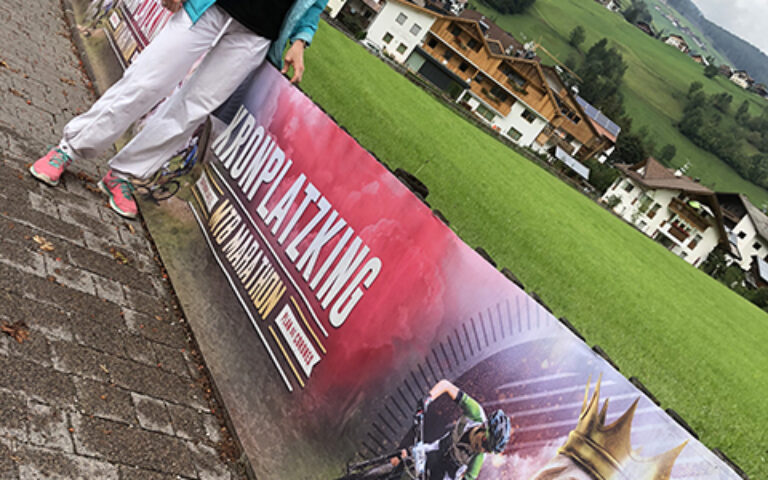 „Race report“ for the Kronplatzking

On Friday after school we drove off  and after 9 pm we arrived in St.Vigil to start the Kronplatzking – Marathon. As the weather forecast was not really looking good, I asked if the start was planned at all. The reply was  yes, but on a shortened route!

With that information after a long day and a longer drive, fell into bed dead tired.

After a fine breakfast at the Hotel Condor I wanted to go for a little ride to relax and stretch my legs. I rode the beginning of the track and could see immediately that the start had been moved out of the village. After a bit up the first ascent, I wanted to go directly to the alp, but then I got lost and had to go back because there was no way through, there were so many trees lying on the ground. Thinking what to do,  I went to the valley station and bought a ticket and let the gondola take me up so I could have a look at the trail. At the top there were three male riders, so I started the descent with them. One was a good rider and together we headed down the trail. It was really great fun and we were even able to catch up and overtake female riders. Having enjoyed this and stretched my legs out, I rode back to the hotel.

Now it was time to put up your legs and get through the day. Not for a long time had I the leisure time to watch a film on TV. After a quick shopping trip we had a nice lunch. Later I had to get my starting number and the day was over with chores and preparation for the race. Next job was filling our bellies during dinner. A fine salad buffet (which we visited twice) was followed by puff pastry with asparagus and asparagus sauce for Erich and papardellet with tuna and artichokes for me. We continued with a super tender veal filet with pistachio crust, potatoes and vegetables. For dessert a Tiramisu, cheese from the buffet. Well, someone had to eat all this fantastic food!

Since dinner is always rather late in Italy, it was already time to go to bed.

In the morning at 6 o’clock the alarm clock went off and we went for breakfast. As it was raining outside I wanted to fill reserves well, because in cold weather I always need a bit more energy and I wanted to be prepared for that. With the bad weather, despite the shortening of the route, about 50km and over 2200hm were waiting for us!

Afterwards I had some time and at 8.00 am I wanted to get on the rollers, so that I could start well warmed up, the engine already at operating temperature, making the start a little easier for me.

I was already on the rollers when at about 8.20 a man came and told me that the race was cancelled! To be absolutely sure, I called Maurizio, but he also confirmed it was off.

What now?! I think it was the most sensible decision and yet I was standing there and did not really know what to do. So I rode for an hour on the roller and afterwards we packed up and sadly went home… because what could we do hanging around here for a whole day in shocking weather and only go home the following day.

So shower, pack and go. In the meantime Erich made arrangements with friends so that we could meet them on the way.

From San Vigilio to the agreed meeting point would normally take about 45 minutes – we had 2 hours to kill!

Seeing them again felt really good, but now we are on our way home and we simply don’t seem to be the only ones who have chosen this direction, because although we have already taken 40 minutes we still have 4 hours to go home. I hope we will still arrive home sometime!

I would say a weekend to forget!! Waiting, waiting and again waiting for nothing and again nothing! Its very tough on the organisers, getting things ready ten under pressure, having to cancel at the last minute.

Nevertheless, a very big thank you to the organiser and all the helpers who put their heart and soul into it, only to have to scratch it at the last moment!!

Let’s hope they have more luck next year!