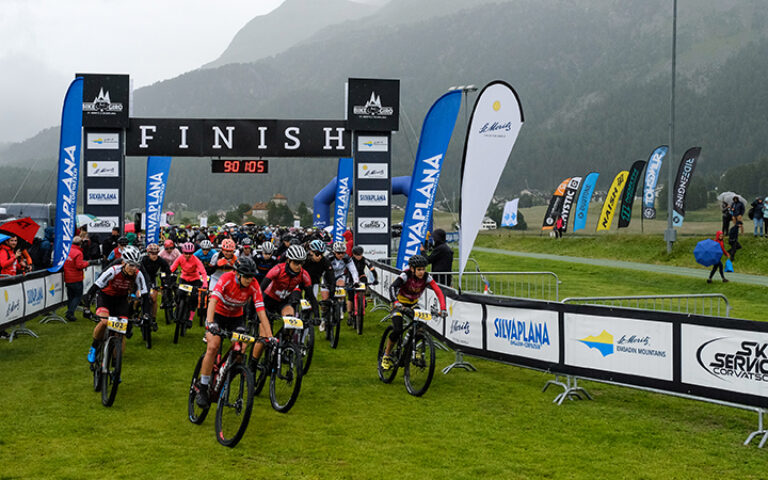 So, on to the second day.

Unfortunately, the weather today was really as bad as announced through the forecast.  Shortly before the start it started to rain quite a bit, so at least it was clear to me what I would wear. While some rode short / short, I was well wrapped up with arm warmers, gilet, rain jacket, knee warmers and booties – but that was true for me many a time in these conditions!

So, we started, first towards Maloja, in a constant up and down over Alp Prasüra, Bregalia gaining height to Ca d’Stranam, before we dropped back down to Lake Maloja via Isola, valley station Furtschellas and back to the start / finish in Silvaplana. As usual, I didn’t start very quickly and was soon behind, but I’m not at all worried at this point.

But then, just as I was able to catch up with Lüthi and Co…..I had a technical problem, my seat post…. It could not rise back up properly, so I was sitting too low which is hard work and loses power.  It didn’t help pushing too hard, so I had to stop and put my saddle up a bit. Unfortunately I missed the connection with the group with this stop!

In Silvaplana I hoped to fix the problem with a new control battery. But when I stopped by Erich, he ruined all hope and told me that the seat post had gone gaga, doing its own thing. Completely disappointed, I made my way to the second loop of today’s lap. We went via Chantarella to the antenna and Alp Laret, further towards Samedan past the church of San Peter, where a slippery section led up the meadow. From there up to Alp Muntasch, then  a traverse to Marguns up very steep ramps to the reservoir. Turning and back down to Corvilia via the Olympic trail down to Chantarella, further Salastrain, Alp Suvretta, Fopetta’s trail down to Champfer over the forest back to Silvaplana.

At this point my motivation was on the floor, riding along the lake up to the Chantarella middle station, because I had to do all of the trails without being able to lower the seat post!

It was pretty tough, I didn’t feel like I was getting anywhere. It was hard and the bike hardly rolled. I also had no group and rode for myself. However, I managed to climb the ascent to the Antenna and was even able to pick up and overtake another woman. One place saved. Soon I was in San Peter, faster than I thought and I realized that I had drunk almost nothing  but I had taken cakes or braid at every catering point…

When I was riding down there on the slippery section, I suddenly saw Lüthi in front of me, so I hadn’t ridden that slowly (sometimes the feeling deceives you!)  It took a while until I could catch up with her, but the good news was that on the climb, I was able to overtake them to Alp Muntasch and soon drive past Ming.

But then the next mishap happened, when I wanted to put my glasses on the helmet, the side fell off and the sunglasses fell to the floor, I had to stop to pick them up and start again! While riding, I tried to stow the glasses somewhere, which of course also took some time to fiddle about and get them sorted, especially since I couldn’t really drive rhythmically.

Then finally I was on the Alp Muntasch, but still far from the top and riders were still a good 300hm ahead of me before going down a trail to Marguns. I was able to overtake Tauber on the climb. Unfortunately, I was not that quick on the descent, (thanks, seatpost) and when I arrived in Marguns it started to rain again. Here I was cared for by Fabienne and of course she cheered me on! The rain and the headwind didn’t make the climb easier and, above all, it was mega cold – but pedal-pedal-pedal I struggled up.

When I finally reached the top, I took a Muscle Relax from Sponser as a preventive measure, because I would have had to stop on the descent if I had cramps! 🤪 So I finally arrived at the middle station of the Chantarella Bahn, where Erich and Fabienne stood one last time to give me a bidon.

Fortunately, the rest went quite well, I struggled up to Alp Suvretta then down the trail to Champfer, but unfortunately not fast enough, because when I drove out of the trail there was Lüthi on my rear wheel. She was so fast that I had no chance to follow her and unfortunately, I had to let her go. 🤨

After 4h29min I arrived at the finish line, not as happy as yesterday with all my problems, but good.  Today I finished 7th, I hope tomorrow will be even better. The weather should improve.

Thanks to Erich, Fabienne and Stephan for the support and to all fans on the track!