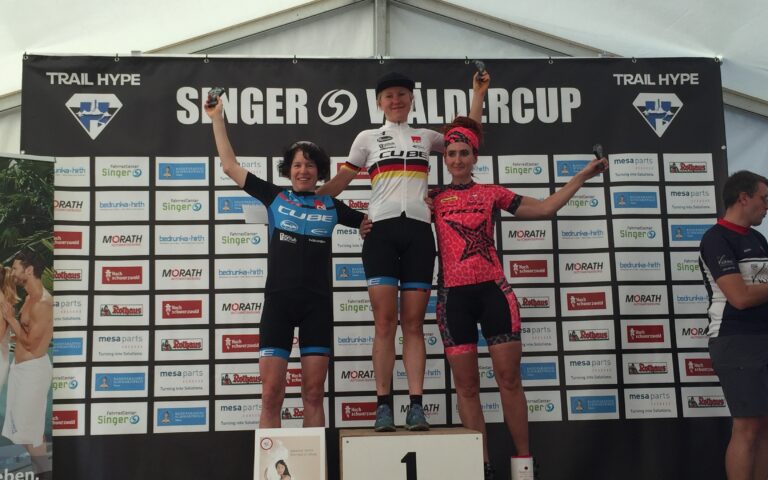 We all have these moments, so, very spontaneously I decided in the middle of the week that I would go and enter a race on Sunday.

Erich found out about the race in Titisee – Neustadt after browsing the internet and 60% of the 60km in this race are on trails – and that, in Germany, given the forest restrictions, made me even more curious.

We set off on Sunday morning to Titisee – Neustadt for the race. I even managed to motivate Stephan as well! There must have been something in the air, he was even more spontaneous and decided to start only on race day itself!

But there’s more, Fabienne wanted to cycle from Rohr to Neustadt – Titisee, 100km !!! We are all crazy!

The weather was at its best, although it was still a bit cold when we drove by car, but hardly a cloud in the sky. The start was at 10.30, so it would certainly be a little warmer then!

The start was on the uphill facing landing area of the ski jump, the bit which slows the ski jumpers down. There was an additional bonus too. We were allowed to start as elite riders  at the very front, so we were almost already at the top of this hill! 😉 A little harsh for those at the back with a steep climb immediately after the off but we were happy to be where we were.

I was really looking forward to the race and especially to the variety of trails. Since the race was run for only the 2nd time, not too many riders have discovered it yet. 😉 Too bad, because the track is really great! On reflection I think a participant limit is essential, too many riders would cause traffic jams on the trails, which would spoil the ride and be a pity!

The start was pretty fast, everyone wanted to secure a good position for the narrow trails.

First there was a short climb on gravel, and then another a little longer! So that gave enough time to position yourself! I could believe (if I saw this correctly) that I was placed second in the women’s category. Schneider, who was ill, as she told everyone in the interview before the start, set a fast pace. I could not and would not follow her but decided to ride my own race.

After about 7km we approached the first section of trail. I had free rein and could really enjoy the descent! Next, the track was initially on a trail and later on gravel on the second longer climb up to Hochfirst.  Shortly before I was at the top Eibl joined me (in training mode ;-)). I could still hold my own and led down the descent before her, but when it got wider, she overtook me. I followed her and saw where she could gain ground! I tried to do the same, but I did not do as well as she did, so she pulled away from me. She also had a good kick on the climb and could open up a little more.

Then we were constantly up and down over the next 15km to the finish line for the first time. At km 21 I was expecting Erich with a fresh bidon but he wasn’t to be seen. Where was Erich? Whenever he isn’t where we planned to meet, I’m a little worried that something might have happened. I’m glad if I see him then at the next food or drink station in one piece!

On we went, gravel, trails, steep and crisp climbs, many roots, all on trails, it was really great and despite the effort, I had a big smile on my face! After about 1:45 hours I rode for the first time through the finish. Erich was standing there with a new bidon, which I desperately needed, because I was „empty“! It was very good to see him.

Just before I passed the finish, I could see that Eibl had caught up with Schneider, and my distance to her was not that great.

I quenched my thirst and was a little scared that the bottle would be empty very quickly and it would not be enough to reach km 51 !! I rode on all alone and tried to keep up the pace to get around at about the same time for the second lap.

When I was near Hochfirst, I thought I could see Eibl in front of me, but I was really not sure. But when I finally caught up with her things were clear. She wasn’t feeling well and I asked her what she had! I tried to persuade her and give a little help by working with her. Eventually I rode back up to second position, but had no idea how far Schneider was in front of me! (I found out later that Eibl had pulled up, she was definitely not well!)

I gave everything, but I couldn’t catch up with Schneider! I completed the course just under 3.5 hours and was second across the finish line!

The GTR Cube could once again celebrate a double victory!

I would also like to congratulate Stephan, who finished his race in 6th place! BRAVO!