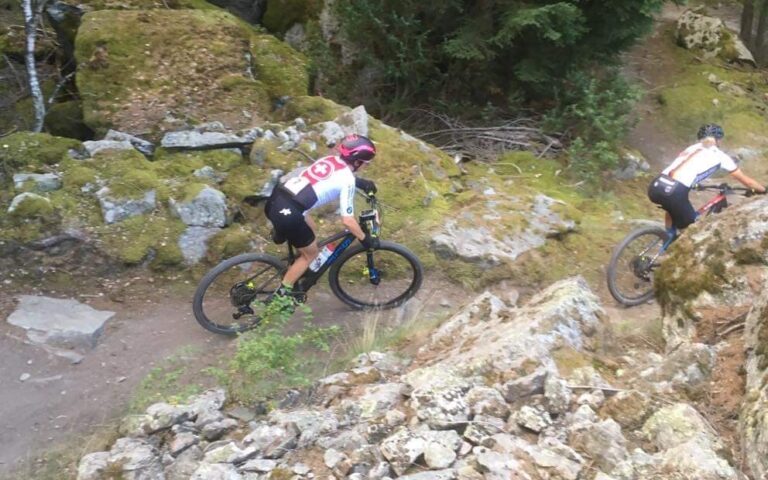 At the beginning of the year, I said to myself that I would only start at the Marathon World Championships if I am competitive and have a chance to be in the front and ride for the win.

Having not really been able to regain my full performance in the last few races and having been disappointed both at the National Park Marathon and at the Marathon SM, I seriously considered my current form and not starting!

Erich, Fabi and Stephan however thought that I should, being Swiss, have some obligation to start at a World Cup in Switzerland!

So when all was said and done, there we were on Friday after school on the way to Valais. Our accommodation was at the campsite in Randa, the association doesn’t support the marathon riders in a World Cup! Once there, we put our caravan on the pitch in darkness and then crawled right into bed and slept deeply!

On Saturday we drove first to Grächen, because I wanted to look at the start and the final loop around around Grächen. Fabi and Stephan accompanied me while Erich waited in Grächen for us.

After the start loop that we found, we were misdirected and found ourselves on the first descent to Kalpetran again. When we realized this, we were already quite low, so I called Erich to arrange for him to pick us up in Kalpetran (Feedzone 1). All good practice descending. We drove to Feedzone 2 in Ackersand before heading up to Törbel (Feedzone 3) to check the course for Sunday. From Törbel, Stephan and I rode down to Kalpetran, where Erich picked us up again. Back to the campsite, have lunch and go up to Grächen to collect the start number. But oh dear, what a long line! Erich and Stephan sacrificed themselves to stand in the queue, while Fabi and I were still looking for the final route, this time we found it, thank you Grete!

We were just back when the boys got the start number, so they had stood for 30 minutes!

Next we had to wait another half hour until the team manager meeting! When we finally wanted to drive into the valley, we could not get out of Grächen and had to wait another 30 minutes in the car until we were finally allowed to drive! Traffic chaos is understandable with so many teams, cars and support on such small roads. It meant 7pm at the camping, bike service, check and wash! Teamwork was the order of the day and we were finally able to eat shortly before 8 pm and the bike was ready for tomorrow!

At 7:15 in the morning we drove off to Grächen. We wanted to get as high up and close to the start as possible, we knew parking would be a challenge.  After the warm up, the start was scheduled for 9am. I was on the front row, really looking forward to the race, the weather was fine and the track was super cool!  On top of all this, the atmosphere was great and it felt good to be lining up with the other riders.

In my “old age”, I’m no longer a fast starter, and it started pretty quick from the off. No wonder, because the field had 80 world class riders ready to race. I think it was the largest entry in all the World Championships that I have ridden.

Anyway, I couldn’t keep in the first group and rode alone somewhere in between! After the start lap, we went out of Grächen and into the first long downhill on singletrack. Shortly before the trails, I could see Jennie in front of me. Unfortunately, I couldn’t overtake her before we entered the trail, so I had to ride behind her for a while. When I was finally able to pass, I immediately pressed on. Soon I closed on more female riders who let me through more or less quickly depending on the state of the trail.

From Kalpetran it went first a bit up and down, until the next somewhat longer ascent of about 400hm. Here I was able to catch up with Ariane. I would like to have ridden with her, but unfortunately she couldn’t match my pace. The distance between us was not large and so she closed in the downhill to me! This was partly due to knowing the track, unlike myself.

After arriving in Ackersand, the climb up to Tröbel came 14km from the start, I found a good rhythm and made good progress. I left Ariane a fair way behind me, but the race was still long, and I knew she could come back suddenly! Looking back, I could actually see a Swiss rider closing the gap, but I was not sure who it was. Looking up, I wasn’t mistaken, it was Fiona ahead and I was able to catch and hang on to her. Together we were able to close up to Florence and now the top 10 were within reach, plus we were now up in Törbel!

But then, at the beginning of the descent, still on asphalt, me at the head of this group, both my wheels skidded and I hit the road quite hard… ouch…. No one likes to take a fall.

Back on my feet I had to check myself and the bike, critically I wanted to know whether everything still worked, fortunately the next Feedzone arrived! Everything was still working, nothing damaged or broken. Great luck!

The downside of this little episode, the others were gone, of course!

In the feed zone in Kalpetran I was almost on the floor again because the rider in front of me suddenly put her bike across my path and nearly took me out.

To St. Niklaus it was a constant up and down, peppered with very steep ramps! Here I lost a bit of ground, but then on the ascent to Grächen, it all went well again and I could almost catch up with Spitz. Just when I was settling into the race properly after all the drama the buckle on my right shoe broke. I couldn’t build the same pressure on my pedals anymore! Such a pity! Nevertheless, I gave everything in the last 10 k and finally finished the race in 13th position and was the 2nd placed Swiss woman!

I was happy with my performance today, but not really with the final rank!

But it was really nice to ride a World Cup in this fantastic weather and for these fans! Thank you for the BEST support I could have wished for.

Thanks also to my supervising team! Everything once again worked SUPER SMOOTHLY and you gave me so much support!

Congratulations to Pauline Ferrand Prevott on the XC Marathon World Title and Robin de Groot on the 🥉!!