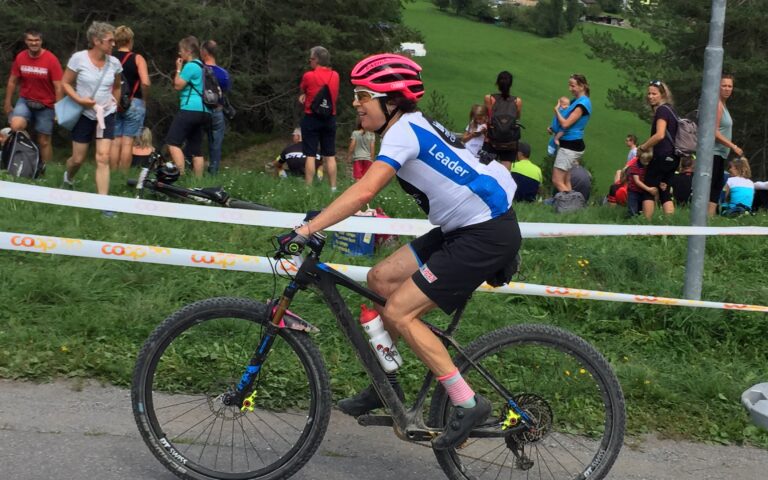 Actually if I’m honest, the National Park Marathon wasn’t on the race plan, but with the victory at the Eigerbike, I changed my thinking. I have the chance to win the overall standings of the Garmin Bike Classic and decided at relatively short notice to travel to the Engadin.

The organizer was hugely helpful despite my last minute commitment and helped find a place to stay, many thanks!

On Friday I took the whole day and after everything was packed, we drove off. Unfortunately we needed 5 hours for the route to Scuol, and arrived at the hotel at 21.30 in Ardez. Luckily Fabienne had already got the start number for me! THANK YOU!

The next shock and challenge was at the hotel…. “you want a room? …I have to get the boss”. I was already looking in my mail for the confirmation… there it was, really booked for us, but the room was not made!  Our room was quickly made in a „fire brigade emergency action“ style!  Finally, I could fall into bed, because I was dead tired! In addition, the alarm would go off at 4:20 in the morning, with the start of the race at 7.15am. I reassured myself that breakfast was arranged, I have checked this with the boss and it would really be ready at 4.30am …. he had confirmed this to me!

When I went downstairs at 4.30 in the morning, it was still dark and nobody was to be seen or heard! This can’t be true, I thought to myself. So first I made the bidons ready and then went down again, it was already 4.50 am, everything was still dark. I could hear noises and decided to search the kitchen. I knocked on the door and indeed, there was someone in the kitchen, the boss in person. I asked if there was breakfast? Yes… YES! I reminded him that he wrote to me that there was breakfast starting at 4:00 am, it was already 4:50 am. But he had no stress, gradually brought rolls, milk, juice, cheese … from the kitchen, and finally with some peace of mind I could finally have breakfast.

At the start we met Fabi and Stephan, who gave me the start number and I was able to ride in to the start area. After so many faux pas, it could only get better. The weather was fine and I was looking forward to the race. The women’s field was manageable but I didn’t know all the riders. This is always a bit crazy, because if you don’t know them all you don’t know how to react when someone rides away.

My goal today was of course a win, but above all I had to finish the race to earn points for the overall classification and then hopefully I can recover in a week and be fresh at the SM in Alpnach.

After the start we climbed up to the Constaina pass, this dragged on long and hard. It was never reallysteep, but quite steep and the landscape very nice. At first I had a dispute with a rider I did not know, but then I was more or less on my own. I knew that another rider was somewhere in front of me and that was it. In the downhill I was able to leave her and did not see her again.

From Fuldera the course went in the next climb up to Döss Radond a good 600hm up a section. Up we rode on a plateau to Alpisella and down to Livignio. As I rode, I realized how many gradients it actually had. Fortunately, in Livgnio I caught a group that was not really fast, but at least I didn’t have to ride alone, it was very helpful!

Erich told me that Sosna (the leader) has over 7 minutes advantage. That baffled me a bit and my strategy to make up for the ascent to the Chaschauna was more or less in the air. The rise up there was really steep! But somehow it did not really work as it should today and it was all a bit tough. So I pondered at the Chaschauna and asked myself how to get up there !! I was happy for my 30s chainring, so that I could ride almost anything – and that made me a bit proud.

I also mastered the downhill quite well. Unfortunately I did not have a group from S – chanf to Zernez and Lavin and had to ride everything alone. This was all the flat valley and rather shallow, so not really my specialty and here I missed having the „big“ gears. I could continue practicing the „drop fork streamlined“ position….

In any case, I finally came to Lavin and another incline came, in comparison to what I have already driven it was a „bump“ but after 110 km it hurt. Fortunately I could ride with some others again and that felt good.

Up to Guarda and Ftan and then down to Scuol! The downhill was cool and I could even leave one or the other men. At the bottom of the valley we had to master a short but poisonous climb up to the finish last year. After 6 hours and 53 minutes I made it and finished in 2nd place. Far from my track record, but it was done.

Of course, I was a bit disappointed that it was not enough to win, but Sosna was just too strong on this day.

In retrospect, I have learned that she rides road time trial and this race is right up her street given this preference. In addition, unlike me, she was able to ride in a group.

As an aside, I was super happy that my two athletes, whom I write training plans for and help to prepare for races, both made the podium. Fabi on the Putèr (47 km) – track on the 2ndplace and Sabina on the Valander (137 km) took 3rd – BRAVO!

Thanks again to the organizer for the great race and the accommodation! It’s always nice to be so warmly received and it’s great to see the same faces again.

Thank you also Erich, who in turn „sacrificed“ one day to feed me and drove his own road rally stage on the passes to be on time on and in the right place every time!