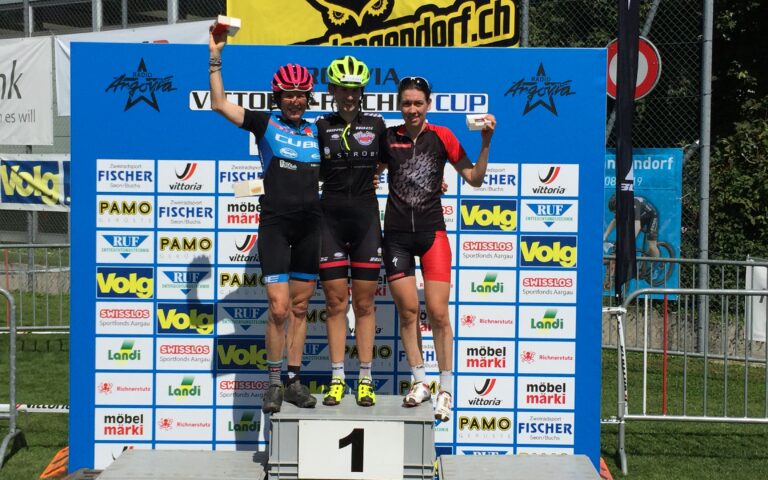 Yesterday I started at the Argoviacup in Langendorf. This was going to be a good and quite intense workout for me. On Saturday I spent the whole day at a further education event with the FHNW and so I was glad when Sunday came around and I could get on the bike.

Since the start was only at 1 o’clock, I could still look at the track and check lines before we started. I’ve already ridden the track a few times, but because of the many small loops and the many roots, I found it rather difficult to remember what comes when, especially under race conditions. However, we had to ride 7 laps so I was sure that I would have it sorted before the finish!

As so often is the case, my rivals were younger than me, some even 20 years or more: – Oh, this too is a challenge, can I still keep up or become too slow for such „short and fast“ races?

The women’s field was manageable, but no less ambitious! 😉 Everyone wanted to do their best and up for a strong race!

Then the starting signal and go, first a start round. In the forest, this should sweep and lead back to the finish. But oh dear, there were still tapes, we could not turn!  I already figured that we would revert to the „normal“ round but then, when we went straight into the forest, we had to go back to the finish with a turn of 180 °. I didn’t know that and was a little surprised. But everything settled and went well again, we rode back to the finish then continued on the regular laps I remembered.

Paula Gorycka (from Poland) took the lead and I tried to line up as far as possible, which I didn’t do well. While I was not at the front right at the entrance to the forest, I was already able to line up for the first trail, exactly the position that I wanted. The field dragged on. And then almost at the furthest point of the lap, you had to climb up to a fairly high level and since this was not quite possible in the pack, most had to dismount here briefly or put one foot down which was risky, there were already rider gaps too. Luckily, I was still in second place and came through this pretty well.

So we all went on to the second lap, Paula leading, with me on her rear wheel. Unfortunately, I made a mistake in a technical passage and Paula was able to open a gap.

The gap was not so big and I decided not to have to open up again, but rather to ride „clean and careful“ so as not to make any mistakes. This was not easy on this course with so many roots. I drove a good rhythm, but couldn’t relax. I lost about 10 seconds per lap so Paula moved further and further away. In the second to last lap I rode as fast as Paula and in the last lap, even half a minute faster than she did. I pushed hard and could finally close the gap to 42 seconds. Reassuringly it took almost 5 more minutes for the third to finish.

I’m really happy with my performance and would like to congratulate Paula on her victory and also Janina on her third place.

But all the other women fought hard too, thank you girls for the great race. This has definitely pushed me out of my comfort zone! 😉 and to answer my original question, yes, I certainly can keep up!