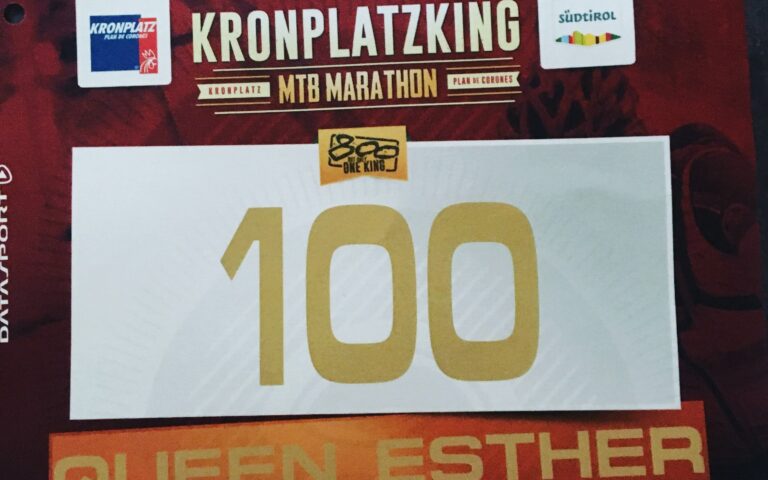 After a week in St. Vigil, it was finally time to focus and the start of the Kronkplatzkings 2019 was just around the corner.

Late on Sunday it had thundered so I was startled from sleep, as I thought my caravan awning would fly away! But it stopped! In the morning it was pretty humid, but also quite warm.

We started at 7.00 and headed to the start. The team included Fabienne and Stephan, who had come specially to help feed and support me. Here’s a big thank you!

On the rollers, I warmed up and was able to watch my competition for the crown.

My strongest competitor would probably be Nisi, a small Italian woman who rode very high and well on the mountain. Since the Kronplatzking had more uphill meters than downhill, certainly a plus for her. Looking around , I didn’t know a lot of the other riders.

Then the race started … out of the village in the field, along to the first ascent, the field quickly stretched out and I tried to do my thing. Nisi was gone pretty quickly, like a machine driving her up the mountain, I could not follow her at this pace.

At the beginning I settled, I think, in fourth place, which was not easy to make out, since we started with the men all together.

I tried to settle and ride my rhythm but somehow the pulse just didn’t really want to go up, which probably due to having a cold. You plagued me a week ago and apparently, you’re not quite done yet!

I struggled up the mountain always in sight distance to place 2 and 3. After about 8 km on top of the Rit, the course went down for the first time and I was able to make real progress. From the village of Wengen it went up a mega steep climb. It was really hard to ride because with the rain of the last night, it made the course sticky and it didn’t roll well at all.

We battled up this energy sapping climb, I could keep up and even make up some ground. At the top, I plunged into the downhill. I realized that I was faster than the riders around me and rode away in front. In the slightly flatter sections, my goal was to stay in the group and keep up the pace. I could finally leave the third placed rider behind me and now took third position. At the top of the Piz de Plaies as I was faster, all but “the one” rider let me take the singletrack lead, thanks!

Fortunately, this “one“ soon realized that he should let me in and made some room. I went downhill and caught up with one or the other rider who gave me more or less space so I could pass. In the last third I finally joined the 2nd placed rider, but they did not let me through of course! 😬

We rode together through the first feed zone and on to the second round, which led into the valley towards Tamersc. Since they did not leave me in the downhill, I decided that they should now take over the leadership work. We continued together, the men I had dropped in the downhill, gradually closed again.

When it first went into a trail, I decided to go ahead and take advantage of the full-suss. This section was rather flat compared to the whole track. The trails were flowing and peppered with roots!

Since I could literally hang out and with my campsite neighbor we flew over the trails into the Fanestal. After a further 6km we returned and rode on the other side of the valley back to St. Vigil. Shortly before the village we turn right up to the Furkelpass. Fabienne and Stephan were already there waiting with a new bottle.

Now it was up for about 1.5h, high and again high.

I wanted to try and stay with the group so as not to slow down. But I did not feel really well.

It was not so bad and I gained altitude meters and after about 40 minutes I was at the Furkelpass. I had left my companions behind me, so I was not so bad on the trail after all!

After another 40 minutes, I finally arrived on the Kronplatz for the first time! Now onto the Furcia Trail! Hooray! Unfortunately just one more rider was in front of me on the trail and frustratingly did not want to make room! When I finally got around, he still berated me, but I did not understand his words and frankly,  I didn’t care, the main thing I had clear trails ahead! I took the red line, which was a little harder for a little shorter distance.

This little round back up to the Kronplatz up to the Ciahütte went so-so. Then came the reward, the Herrensteig downhill, which was really fun again and I was able to get some men out of the way, which kept me in the same place.

Way too quickly I was down and after another section of downhill on the gravel, it finally went up for the last time to Kronplatz. After looking ahead, it went almost vertically up to Geislerbergerhütte! About 3 km from the finish I could actually see Nisi in front of me, but unfortunately, she was too far ahead for me to catch…. I fought my way up the mountain, fought and fought hard and finally arrived second at the finish!

Unfortunately, I could not defend the crown, but at the end I am satisfied with the 2nd place, even if I had not reached my set goal! It was satisfying, because finally I had given the maximum possible and unfortunately this time another rider was quicker, but that’s sport.

We finally enjoyed a fine burger on the summit and waited until the sun showed again for the award ceremony.

Then we went down again on the Furciatrail to the Furkelpass and then on the road to St. Vigil.

I would like to thank all those who supported me. Thanks to Fabienne and Stephan, who came here to look after me, the Kronplatzking for the invitation and the great track that you prepared.

Thanks also to The Camping Al Plan for the stay and the nice camping neighbors….. very cool!

It’s a very special race and the trails are just awesome. The scenery is simply beautiful and imposing!

So, we continue to Montafan, where I will start on Saturday at the M3 Marathon. I hope I can recover well and can shake off my cold.  I really want to be able to go full gas on the next race!