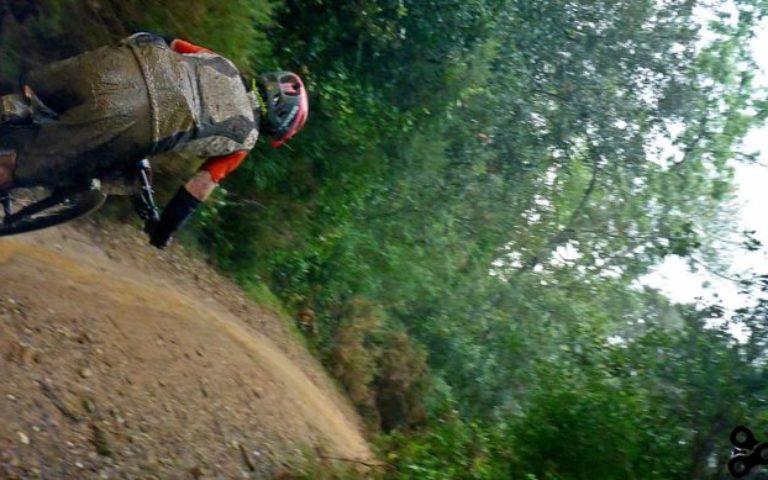 Instead of celebrating my Dad’s 70th birthday with a brunch, I accepted the invitation to the singletrack – marathon #latramun in Girona. Much was discussed and written in advance of the race, its reputation is superb, so I went to Girona quite excited and full of anticipation.

Unfortunately, the weather forecast was not great …. but I can’t change that!

As the start and finish were not in the same place, we were driven by buses to the start.

Already during the journey, it was raining quite heavily. Knowing this would not make the course easier, I was a bit nervous and wondered what on earth I was doing here! Many had said that it was dangerous, slippery, not well protected, too few warning signs ….. and the first part will be more difficult than the „XCO-Course“ which was the last part of the track….. It was a good job I had Viktoria along to look on Friday, I definitely wouldn’t be without her! We had just over 2.5h for this 33km!

With all this potential carnage to come,  I was at the start in the middle of hundreds of other riders and thought to myself „Just reach the finish safely!“

With a little delay we started and it went as usual… pretty hectic to and fro. Especially since it had first a flat section and many changes of direction. After about 1km we rode to the first ascent, this was on asphalt and about 5km long. I knew from Knut that it was important to position yourself well at the end of the ascent, because then the trails started, and it was possible to be locked into a position (95% single track share!).

I was not up front in this section though, keeping both on the track and also my place was difficult but as soon as we hit singletrack I got into my rhythm and managed to overtake riders. Riding along I was able to be curious, what should I expect? It wasn’t raining yet, it was pretty warm, and I had to remove my glasses as they were steaming up and I didn’t have good vision.

Before the downhill section we climbed up to the tarmac on a jeep track. The field was already stretched out, the riders looking like a string of pearls. Into the first descent and it was quite steep. I dismounted a couple of times over very slippery rocks. I just didn’t dare to ride and risk a fall. With every metre I was feeling more comfortable and confident…. I was a little apprehensive, waiting for the really difficult sections but I have to say I was pleasantly surprised… it wasn’t so bad after all.

The trails were very varied, again and again the ground changed. It was really fun, it went up and down and the weather was still on its good side, although no sunshine but it didn’t rain! There was such a dense fog that I was a little afraid to lose my way, but the mood was fantastic!

After 19km we rode through the first Feedzone (I was already 1h15min on course.) Quick stop, switch Bidon and continue. Constantly changing, the course went over singletrack up and down further. The climbs and descents were sometimes quite steep and slippery due to the rain at night, but I managed it well.

I was now in a group of men, and there was absolutely no rush. If anyone was faster, you let him or her past! No problem, no heroics.

Meanwhile, it had started to drizzle. In between, it also rained a little stronger. Unfortunately, in the forest, I didn’t really get along! Slowly I ran out of drink, and I longed for the next feed zone at 44k. But somehow, I did not check that I was supported in this Feedzone.  I didn’t see my bidon either, so I stopped at the official area, immediately dropped a cup, filled up the bottle, oiled the chain and went on. Butthen I saw my bottle, so I took this as well. I could have saved time and the other stop! No matter, better than if I had to continue without a drink!

The rain set in and became steady and constant. At the next feed zone, I decided to put on the wind west and arm warmers, because it was raining really hard! The trails were partly turned into streams, some descents changed to toboggan runs and sometimes I went on my pants, sliding on the ground. Just hold on to the bike, launch and slide! In one place, we had to push up a mega step, I almost didn’t make it and was glad for the helping hand. It was not one against each other now but one with each other, everyone helping out!  Slipping, riding, sliding, stumbling, lurching … we finally managed these team games and got through without major injuries.

The rain didn’t ease up, but we slowly made progress to the finish back down in the valley. 5K out from the line, in spite of the glasses I had put back on to keep out the dirt, my vision was still poor. The trails along the river had turned from paths to streams. They were so dirty with the added problem it was impossible to judge how deep or what was floating in the water. It was becoming normal to enter a section and water would go over the hub….. there may have been some screaming……

On the last kilometres of singletrack, I thought to myself once or twice, “enough is enough” and I wished for the finish line….

When I finally got into the stadium, the grids and marking were on the ground, but no one was there… a very strange and empty finish to a race. I would have wished for different but in the middle of the storm people had found dry spots in tents or buildings…. Understandable really, I suppose.

I waited 2 hrs for the podiums because we had to go to doping control and after everything, it was back to the hotel.  Time to shower, pack and wait for Knut and a ride back to Barcelona!

Despite the bad weather I’m really pleased to have ridden this marathon. It really was a special course and in hindsight, the conditions made it even more memorable… the trails were super cool too.

I would sincerely like to thank Knut (and the organiser team), who made it all possible.

Congratulations to all who mastered a tricky race. This was very much a “Hammer or Hardcore” performance.

I have had a great season end to 2018 in which a lot just didn’t go to plan… If you have been following my reports, you’ll know of the crashes, injuries and battles along with the highs and lows… quite a season indeed.