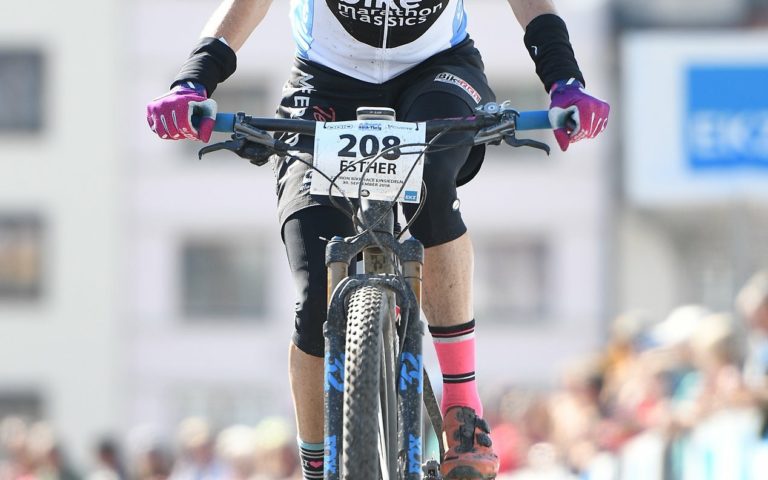 As is every year, we were on the road early to Einsiedeln. I was wanting to see the end of the course and the track, but with only an hour before the start, it wasn’t clear where it would go!

I was feeling a little nervous, but I was looking forward to the race, it would certainly be a tough fight for the podium and victory.

First, the Blessing spoken by the Father and then the starting gun! We were off!

When the field rolls together for the first few kilometres, it is always very impressive and also a kind of calm meditation. You hear the noise of the tires on the asphalt, the sun is still low in the sky, sometimes obscured by a mist, sometimes with a view through the cloud.

As soon as the pack go into the first slope, the field extends in length and there is room to move and select a line at will. Ariane was a few yards ahead of me, but always within striking distance. I didn’t want to start too fast, because the course was a long 101km, plus the climbing of course.

Together we reached the top, Ariane sprinted into the downhill, I was a little more restrained following her. She squeezed past two riders, which I didn’t manage ………..  and she was gone. She got to the first feed zone after 20km and about 20 „out from the start.

However, in the next climb I rode back to her. I didn’t want to overtake, because it was too early to go alone at the front. Together we rode the ascent to Alp Grueb. Again, she escaped from me in the downhill! Next catch-up was in the ascent to Sattelegg andagain we rode together to the Büel! Then it went down over the wet and slippery tree trunks. Ariane in front, me behind, with a male driver pushing in between again! This was followed by a short trail on very loose gravel covering the ground rapidly to Tale!

I had no chance to follow Ariane and she opened up a gap of a few seconds again. I was able to close the gap and so we rode up to the Silver Fir together. Sitting directly on her rear wheel I rode into the next downhill, to Studen-Dörfli. The plan was to hang on until until the ascent to Oberiberg, and there I should have the climbing advantage….  and didn’t want to be left behind!  I wanted to try to stay close to her, but I had no chance, she was just too fast for me! I was really scared to ride down at this pace!

I finally found myself alone at the bottom, while she was ahead I had these other guys with me! That was frustrating, and I thought the race was over for me. When I dropped the Bidon, it was great, just another little niggle I didn’t need. When I was back on the bike, two riders came from behind and I was able to join them which on reflection, was good for my morale!

When we went into the climb Ariane was already a long way ahead of me! I tried to keep my rhythm and in fact I closed the gap to her! In the steep turns before the hike-a-bike to the Eagle’s Nest, I tried an attack and managed to actually open a gap. Also, in the „flat“ intermediate part to Fuerderegg she didn’t catch me! This inspired me a little and I was back in the race! I could then focus on the mountain prize on the Spierstock!

Next, the „most difficult“ and puncture-prone passage of the race. In spite of this, I didn’t want to ride too slowly and in fact I was able to assert myself at Ibergeregg! Wow… another partial success! But…. (there is always a but…), even before the last trail down to Bruni….. she was back!

Although she couldn’t ride everything, even on foot, faster than me! Anyway, I could not spot her anywhere in the Bruni below. She must have ignited the turbo while I fell into a hole! How was I doing…. the head was tired, the legs empty! It was a real fight to master this climb. In addition, my Bidon fuel came to an end and I had the feeling of not having enough energy to be able to ignite the engine again!

So, I tormented myself finally the last two slopes! When I drove down the last descent to Einsiedeln I had tears in my eyes, out of frustration and disappointment! I could not look reconcile myself with the 2nd place and rode steadily. I needed some distance!

Even now I’m still disappointed that I did not manage to defend the title successfully! Ariane was just better than me on the day and I congratulate her on the title of Swiss Champion, she deserves it!

Thanks also to all the fans who took the time to come to Einsiedeln and cheered me so much!

I was particularly pleased that my two God daughters, family and my parents were there!

Thank you, Erich, for the care and comfort!