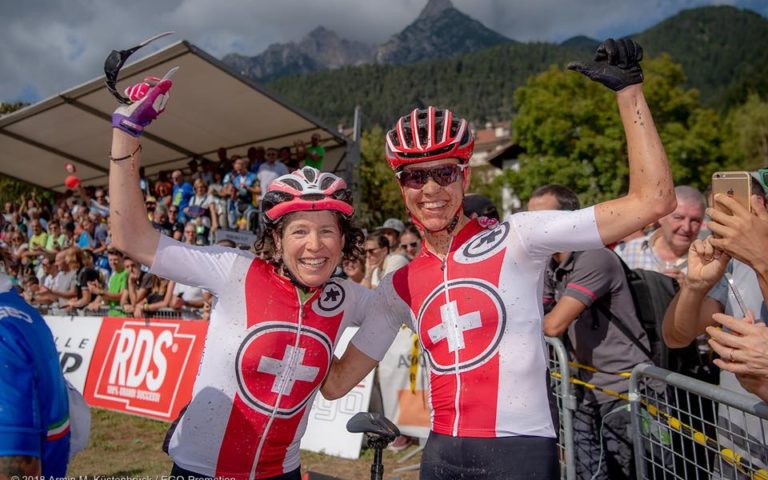 Finally, the day of the Marathon World Championships had arrived. In July, I looked at the track and remembered it as being very tough. It was for this reason I stood with some respect for the course at the starting line.

Birgit, Johan and Jan accompanied me to the start, while Erich was already driving to the first board.

I was allowed to start with race plate number four on the first row. From the off, we made a „warm up loop“ of about 5km and came through the start / finish area once again and then it was straight down to business. The first climb was about 3km long and had an average slope of 15%! I got off well at the start and was in the top ten, that was great! Also, the climb started quite well, although I had to let the first people go. I found a good rhythm and arrived with the second group on top. On the downhill, unfortunately, I realized too late that Nisi was in front of me, I lost the connection to the group.  For this reason, it felt like an eternity until I could ride past her. I started the second ascent with Spitz but I was able to push on and I was now traveling alone.

At the moment it was not so tragic, but unfortunately, I had to ride alone from the 17 km marker on a creeping, rising passage up to the up to Misurina -Chiesetta. This took a lot of energy and I didn’t really know how fast I was going. When I glanced back, I could see a German tricot and wondered if I should wait. The next time I looked back, I couldn’t see anyone, so I decided to go on my own. The steeper it got, the better my legs turned and soon I could see Kate Courtney (XCO World Champion 2018!) in front of me. For a long time, the distance between us remained about the same, but the closer we got to Misurina Chiesetta, the closer I got to her. At the 33km marker and feed zone, I was on her rear wheel. The next part of the track was new to me because we were not allowed to ride it in practice but it went well and importantly, I was even ahead of Courtney.

When we were up at the top, she sprinted past me in the rooty trail and was able to open a small gap again. On the ascent to the Rifugio Auronzo, the highest point of the race, I struggled to get back to her and was able to overtake. A short time later I caught Lüthi and a little later on, Dahle. I was quite surprised, but I did not want to over exert myself, because there was still some way to the finish.

Together with Fumagalli, I finally topped out. Together we rode into the downhill which was a long trail of about 15 min. I got ahead quickly and had fun!

Fumagalli and I rode together until the last long climb, where I was able to break away from her and open a small gap. I knew at the next downhill I had to give everything, but at the same time, this section was also „new“, I didn’t ride it previously. It was quite slippery and rooty and I was not so fast then! Suddenly Dahle came back from behind with Fumagalli in tow. Together we rode on down. Catching Pintaric, we could then separate again, which means I wasn’t so slow at all! When we finally got down to the last feed zone (19km from the finish), Dahle said we should work together to be faster and therefore finish faster. Good plan, but unfortunately not everyone kept to the agreed rules !! While Fumagalli, Dahle and I took turns leading, Pintaric just hung in the back and didn’t share the work. The last loop up, I took the lead, I tried to drop Pintaric, but she dug in hard.

Dahle took the lead in the downhill… I was able to follow her and so we were still together on the trail. Now it was only about 7km to the finish. Furthermore, Pintaric refused to take on leadership work, which caused the pace to collapse again and again……So our group suddenly dropped back and Lüthi was right up with us.

In all fairness, she took turns with the leadership and worked as hard as the rest of us. Then, with 3k to go and after my share up front, no-one really wanted to get up and take the work once more. As the tempo collapsed one more time, we were two corners away from a climb of 300metres. I saw an opportunity and grabbed my chance by leading off uphill. This was actually great as I could ride at my pace without the speed being dictated by another rider in our small group. Still, it almost didn’t pan out as there were two men ahead, but I made it work. At the top, Dahle and Fumagalli fired up the the turbo, got ahead and opened up a small gap but once on the trail I re-connected again. Onwards across the bridge, these two moved away, Lüthi regained my wheel and we set off after Dahle and Fumagalli. We couldn’t catch them and on top of this I had to beat Lüthi as well. She was in front by half a wheel on the line…..

Sure, I approached the race focussed on getting a medal, but I wasn’t strong enough today! However, on reflection I am satisfied with what was achieved, I fought, gave my all but on the day it wasn’t to be, so no medal….

Looking around, I do see some consolation in the fact that others don’t have a second job. If I was able to come to Auronzo a little earlier, I could inspect the course and also be a little more rested for the start. Even though school is not physically demanding, there is always a lot going on and I rarely have time to put my feet up and do nothing! I realise that since I work at school 80%, I spend much more time in and around school.. Thinking about it and being realistic, I am actually very proud to be able to ride so well and compete at the level I do with “full time professionals”, what with me being a “part time professional”… !

So,looking forward… heads up… pay attention….
An important race is on the horizon. Put this in your diary or make a note.
30thSeptember, 2018, Ironbike Einsiedeln…..

It would be a great motivator if there were a lot of supporters at the track to cheer and help me on my way. We are fighting for the title and really focussed on a great result.

If you don’t have anything planned, or if you do but can come for some great racing, be at Einsiedeln…. I’ll see you there !!! 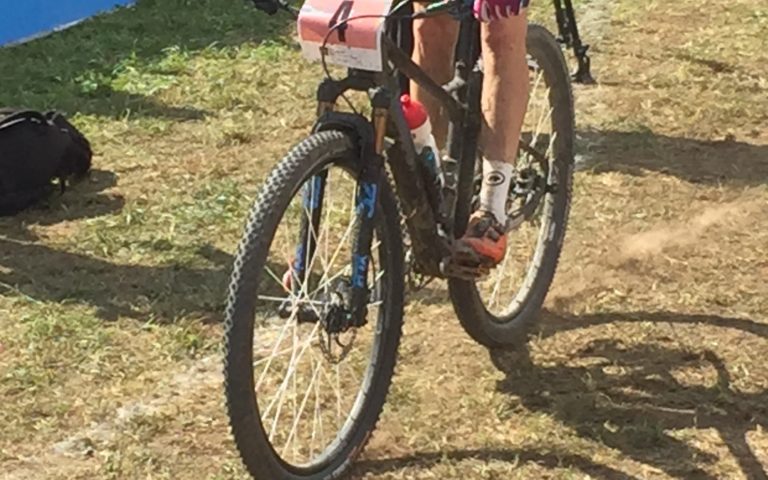 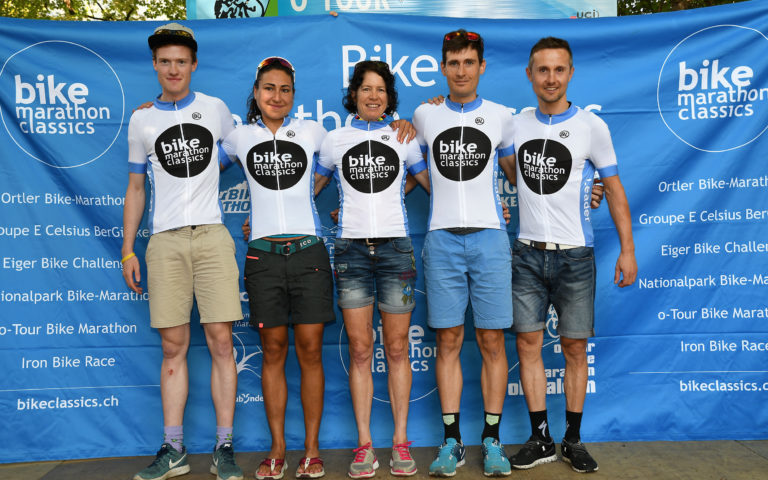 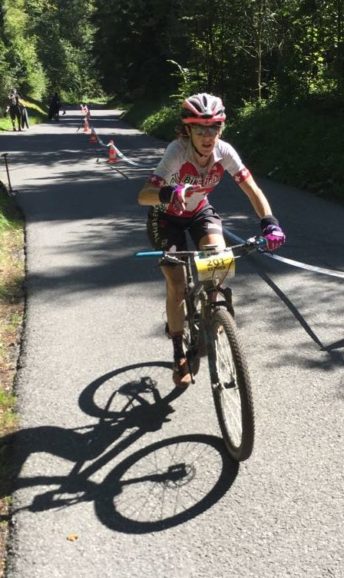 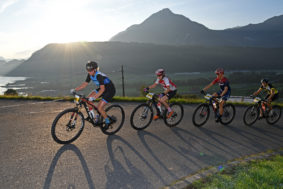 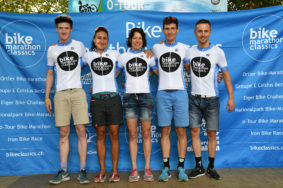 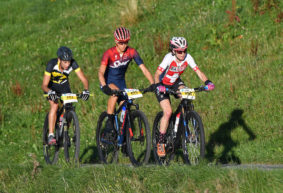 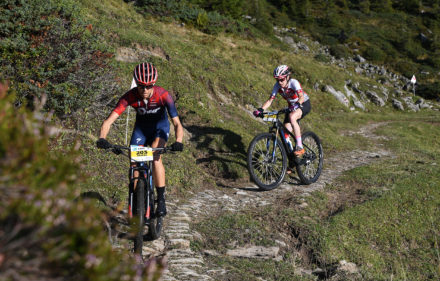 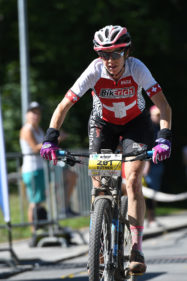 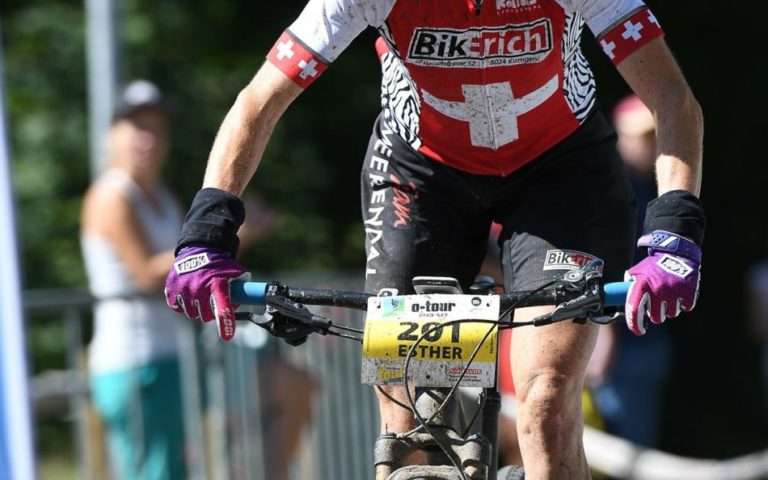 After a busy week, we set off for Alpnach at 5.30 am this morning.

Since the race is part of the Marathon World series, the women had a separate start, 15 minutes before the Elite Men. Since we rode straight into the first ascent and the field was not very large, we started rather „comfortably“.

After about 7 km I took over the lead and soon the field split! From there Ariane and I rode on and set the pace. When I was able to take over the lead again from Ariane, the top male riders joined us and since we were in a trail, they couldn’t pass me! Huber said I should go to the side, but that was definitely not possible, well not without having to dismount! Finally, I was in a race and at the very top of the field! A little further I stopped in all fairness to let them pass, which cost me precious seconds!

Up to the Langis I could ride out 1 minute on Ariane! After that, it was a little bit of undulation, but mostly down to Alpnach! I actually think I rode well and fast, but Ariane was even faster!  We pushed on together through the start / finish area in Alpnach on the second loop up to the Ächerlipass! Downhill Ariane rode ahead, but then I always push forward! I just did not want to hang about too much! (this should really be a last hard „training“ before the important World Championships!)

The concrete ramp and climb up to the Schwendi was really steep and we punished ourselves up there! I realized once again that I was a bit stronger in those steep sections and made good progress in the climbs. I couldn’t drop Ariane at all until we reached Schwendi. I tried to increase my cadence a bit and managed to actually open a gap! That motivated me of course and I kept up the pace! I thought that I would need every second in the long descent from Ächerlipass back to Alpnach and to the finish! My plan was also halfway in place…., the gap was bigger and bigger! But I still had to fight, because the rise took longer than expected.  When I had almost made it to the top, it suddenly felt a bit „spongy“ on my bike!

I had a „slow flat“ on the rear wheel! I thought that I could still ride to the timekeeping on the Ächerlipass (could be that there is a mountain prize, but actually, there wasn’t!), then fix the damage. I could certainly have gone further, but critically it was still 20km to the finish, the downhill was rough and rocky, and I did not want to risk my rim! So I stopped….“fixing“ my puncture, which unfortunately cost me the 40 seconds that I had worked so hard for previously!  Thanks to the „Pepis Noodle“ which worked brilliantly!

I was almost back on the bike when Ariane pulled past me! Annoyingly I had to stop again briefly, because I had forgotten to close the valve securely……. Unfortunately, now the gap was a bit too big for me to try to take her downhill line! A pity!

Two cows also blocked my way, so I had to brake very hard as an emergency stop !! Ariane was just too fast and I had no chance to catch up, with or without these little niggles!

So there it was, I had to settle for the second place today!

Nevertheless, I’m satisfied.  The plates I have drafted were better today than next week (at the World Cup), plus, I feel in a very good condition right now.

The plan now is to recover well, so I hope next weekend to arrive rested at the start and then.. it is called FULL GAS…. 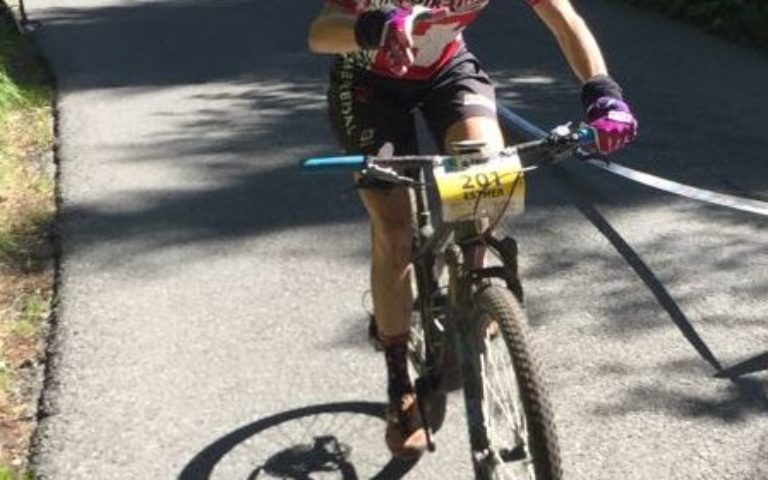