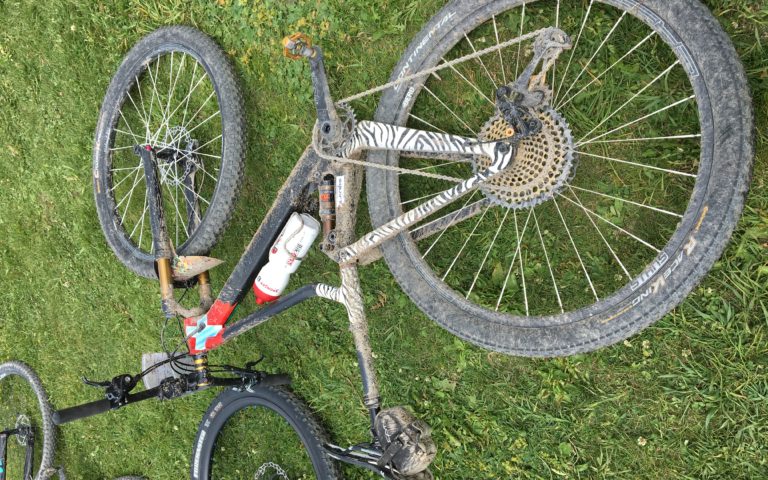 I completed the first week of school on Friday at 3:05pm and at 3:.30pm we were in the car, wheels turning and headed towards Verbier. According to the GPS, we would arrive at about 6:15pm which would have been perfect, but unfortunately the reality was a little different ….

After 2 hours we had made it to Bern. I was looking for a restaurant where we could eat and finally, we decided to stop in Montreux and have dinner. It was worth it, because we found a superb pizzeria! At 9pm we finally arrived at the accommodation, unloaded, paid for the room, brushed teeth and off to bed because the alarm was set to go off at 4am!

As I still had to get my start number before the start, we left at 5.15 am for Verbier! I’m really an early riser, but even for me, this is brutally early and when I was warming up on the rollers, I have to admit I wasn’t really awake yet. Next the race starting signal at 6.30 am…

My plan today was to race and not let the others influence me! I was a bit nervous, I didn’t know for sure if I had recovered enough from the Eigerbike (last Sunday!). I also had respect for the long race distance and amount of climbing.  The stats were 125km / 5025hm and last year the winning time was 8 hours!

The first climb went quite well, the legs turned and after about 1000hm we were on the first trail and departure to Nendanz! The sun was wide awake too! In the first downhill section, this was not so pleasant, because it shone directly in the eyes, almost riding blind. However, the view was terrific … the mountain peaks, the sea of ​​fog over the Rhone Valley!

The descent was rather fast after we left the trail. While I could keep up with the boys on the trail, they could open up a gap on the asphalt. But in the ascent, I was able to close up again! When I was riding alone, suddenly I wasn’t completely sure where to go! One more reason to find the connection with the pack riders again!

Erich was waiting for me in Nendanz for the first time…. Right on cue.

After that I was riding with Bärti for a short time. But suddenly in the ascent to Veysonaz he was gone! I continued my pace through Veysonaz and Hérémence, where Erich met me twice. Now the Mandelon stood before us. Approximately 10km climbing, on top of a cool hill and then into a rapid descent down to Evolène. Erich stood patiently for the 4th time, and I got my 2nd sandwich! When I didn’t see him at the official feed zone and then did not fill my bottle, I was already looking for a well! Fortunately after the mega steep ramp he was there, waiting for me.

Very relieved, I stopped briefly, so that I could take on everything he had, including extra sandwiches (I had wished for more today!). Then the course went to Eison, where Erich agreed to meet again. Now significantly more bikers were on the track, because I started in the group of the shorter distances.

As I had remembered, next was a shorter climb then a descent, before it went in the last long climb up to the Pas de Lonna. At the bottom of this climb I was supposed to meet Erich. When I arrived in Eison, I was a little confused, because somehow, I missed the exit and Erich was nowhere to be seen.

So I rode on, I had a quick meal in the official feed zone, taking an energy bar on the way.

More than 1000hm were in front of me. Curve after curve it went up, past both riding and pushing bikers. I was already over 6 hours on the road and my feet began to hurt, even sitting was not as comfortable as at the beginning of the race. More than ever today mental strength was needed to direct thoughts to beautiful things and shut out the aches and pains.

My next destination was the Alp L’A Vieille, before going up to the Pas de Lonna in the later sections. I also wanted to stop again, eat and refuel. One thing I had learned on the Eigerbike, absolutely good regular nutrition! I said at the start that I would take a Sponser gel every hour and drink enough too. In addition, I also had bars and gums from Sponser with me! Since I could not feed myself all day from „this cute food,“ I wished for one of Erich’s sandwiches. In addition, I took a piece of cheese or whatever was not „sweet“.

After the food fight it was on with the Pas de Lonna. I could still ride a few hundred metres, then all bets were off. Bikers snaked up the dreaded Pas de Lonna. At first, I was still carrying my bike but when the back pain became too much (ironically my feet did not hurt anymore) I had to push my bike too.

This ascent demanded everything, and I thought I would never get up there. It was super tough as I also had to clear the way for myself. When I started here for the last time, I tagged along with another biker who steered and cleared me through all these other participants !!

I finally arrived at the top and I rushed to the food stall, where I scored a soup, and again some cheese !! The route continued over the plateau and the final climb, which was not long at 1.5k but became steeper and steeper! Finally I made it and went down. Gravel, curvy, fast …. on through the Lac de Moiry viewpoint. WOW, so beautiful and so blue! Again and again I had to take a look, but made sure that I did not get off track. After the reservoir we rode on a singletrack. This became increasingly rough and several times we had to cross a stream. Now the hands began to hurt. It would have been best if I had been able to open the brakes, but that was not possible, I would be too quick…. I didn’t want to risk a fall or a mechanical too close to the finish line.

Then after 7hours 30mins I came in as the winner at the finish in Grimentz!

To my surprise, I had also set a new course record, how COOL is that !!

After an interview and doping control, I could finally take a shower and then wait with friends to check the final rankings!

Tired and happy, we finally arrived back home Saturday evening and can now properly enjoy Sunday!

Thank you @rickharrison for the translation 👍