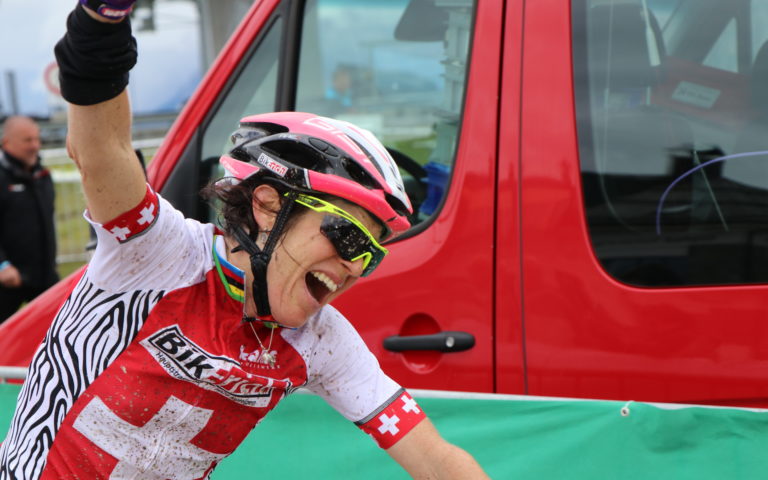 For a long time now, I have kept an eye on the Kronplatz King MTB Marathon. It is a special kind of marathon because the start is in St. Vigil (in the valley) and then the finishes on the Plan de Corones at 2275m above sea level.

Since I have summer holidays, I travelled to Auronzo a week ago with the caravan and I wanted to look at the World Championships track. It took about 10 hours in total to travel to Auronzo. On Sunday Johann came and together we looked and the track. Wow, it was steep, the steep climbs, the downhill sections were rough, then again cool singletrack, so a worthy World Championships track! Every meter you have to work and earn.

After the long journey on Saturday driving solo with the caravan and then the route inspection on Sunday I was really knocked out. I stayed in Auronzo until Wednesday, enjoying the free internet at the campsite, suddenly realizing how much time you spend surfing the social media. Actually, its madness !! 🤪

On Wednesday I drove from Auronzo to St. Vigil where I spent the rest of the week with the Kronplatz King MTB Marathon in mind. I needed to keep focus, because I still felt a bit tired from training in Auronzo.

Maurizio, from the race organization, sent a photo of the crown, which would be the winner’s trophy. The crown looked so beautiful that I really wanted to win her.

About two weeks before the race, I discovered that Ariane Lüthi would also be at the start …. that made my endeavour a bit more difficult. She is really in shape at the moment and the only other time we met each other this year was at the European Championships in Spillimbergo. She beat me on this race. 😬

Erich arrived on Friday evening with the motorbike to support me on Sunday. I knew that Birgit and Johann would be there as well which was great. I really looked forward to the race and of course Erich was here too, and we could spend some time together.

Unfortunately, Saturday was not so nice, it rained again and again. Although Johann and I caught a dry time window for a short lap on the bike, I was sorry for Erich that he could not shred some of the great trails in his free time.

As a result, we had a rather cosy Saturday, enjoyed the camping and prepared everything for the race on Sunday.

Then finally it was time, Sunday at 8.00am was the start. After a short section, which was flat, it soon started to climb. As usual I was not too far forward in the early phase but didn’t get away badly. I tried not to let myself go crazy or be undisciplined because Lüthi was already a few meters in front of me. Another rider was also in front but as always in Italy, it is difficult for me to know how fast these riders are, as I rarely ride against them.

Back to what I know and works for me. I tried to ride my rhythm and actually made good progress. Soon I was able to overtake the Merida rider as well.

After about 7km and the first food station the track went down a bit (organisers had to cut a bit because of the heavy rain and take out a super nice single trail!). The pace was now very fast, but I did my best to stay with Lüthi. She is always very quick in this type of descent. Next a high section before the Piz de Plaies and the first trail. I could barely believe my eyes………. I was on Lüthi’s back wheel. 😳

The four of us arrived at the top and as expected, Lüthi made it in front of me into the start of the trail, plus I had to let another rider take the lead. Even though I was slowed a little I was pretty relaxed.  After this section I could challenge again.

About half way down, we were slowed by a female driver from Italy, Maria Cristina Nisi. At the time I had no idea who it was or that anyone else was before Lüthi. Lüthi got past her without problems, but I could pass her a little later. (Nisi, by the way, was the winner of last year, so a serious opponent !!)

After this cool descent, it was a bit flatter, but not “actually” flat before the valley back towards Tamaresc / Perderü. This part was really cool, always slightly uphill, but super cool singletrack. Lüthi, Nisi and I rode this more or less together. At Tamaresc we turned and followed the other side of the valley back almost to St. Vigil. Just before the entrance to the village, we turned right and began the climb up to Kronplatz. The climb was about 13km and led over Furcia and the Geiselsberger hut.

Nisi attacked again and picked up a fast pace. I went back to my own rhythm and had to let her go. On the up side, I was able to open a gap to Lühti. Since I had a lot of respect for the whole course, I didn’t want to go overboard. At Furcia I was about 30 seconds behind Nisi, so I could always see them in front….. Erich and Birgit fired me up and I rode on. Nisi made a mistake on the trail, I was quickly on her back. It was getting steeper and steeper, which was not playing to Nisi’s strength.

From the Geiselsberger hut it became really steep and I used this to open a gap to Nisi. My intermediate goal was to be at the top of Plan de Corones first, to be able to lead in the trail ahead of her as this was the first crossing of Kronplatz. In the downhill I wanted to ride and stretch out as much time as possible. The ramps became steeper and steeper, the ground was loose gravel and you had to ride with a lot of feeling.

First intermediate goal achieved off we went down the trail towards Furcia. After half of this trail we turned right and rode initially uphill again almost to the Kronplatz (for the 2nd time) before we went over a part of the Herrenstein Trails, a good 10km down. There was also a lot of gravel and it was easy to drop a good 800hm. Then start again on the last 10km for the 3rd and last time up to the Kronplatz and the finish.

After this loop of about 10km back up (almost) to Kronplatz I wasn’t caught by Nisi. In the downhill I hoped to make time again and that finally it would be enough to hold position.

I rode downhill as fast as I could without risking too much, because there was no Techzone before the finish! A mechanical or fall could cost me A LOT of time. On the last climb I tried to ride as fast and steadily as possible.

Still I rode without Nisi or Lüthi coming from behind, but I could not bank on this, because who knows if one of them could fire up the turbo at the end?

I rode my race and finally came back to Geiselsberger hut, but this time I had already some steep ramps behind me, and another 4 ramps ahead to go. At this stage of the race, I was even able to overtake one or two of the men. This gave additional motivation to keep pushing, moving closer to the goal and thus the „crown“ ….I couldn’t look backwards because I had to focus on the track ahead avoiding silly mistakes and ending the race pushing…..

Finally I crossed the finish line after 4:56:38 hours as the winner !! Lüthi managed to catch Nisi in the final meters and finished 2nd. Congratulations to them two for podium places 2 and 3 !!

My „Coronation“ was at 3pm and what went down, was just incredible ….. after the award ceremony, was the crowning of Queen and the King ….. then so many people wanted to take a photo with us as well!!📷🤴👸

When the hustle and bustle of “royalty” subsided and reality kicked in, everything had to be packed up, clothes, gifts, and of course, my crown. Birgit then dragged everything down the train, while Johann, Erich and I were able to drive down the trail again. This time all the way down to Furcia where we packed everything in the car and drove into the valley to Camping Al Plan.

When my mobile had Internet reception again, I received a message from Ingrid saying that I should get my Regal prize money. I had completely forgotten this in the drama of the moment!! 🙈😬

Also on the campsite some great photos were taken !!

I would like to thank all those who supported me in this race, Birgit and Erich! Also the organisers for the invitation to race and do not forgetting the Camping Al Plan !! 🙏🙏🙏