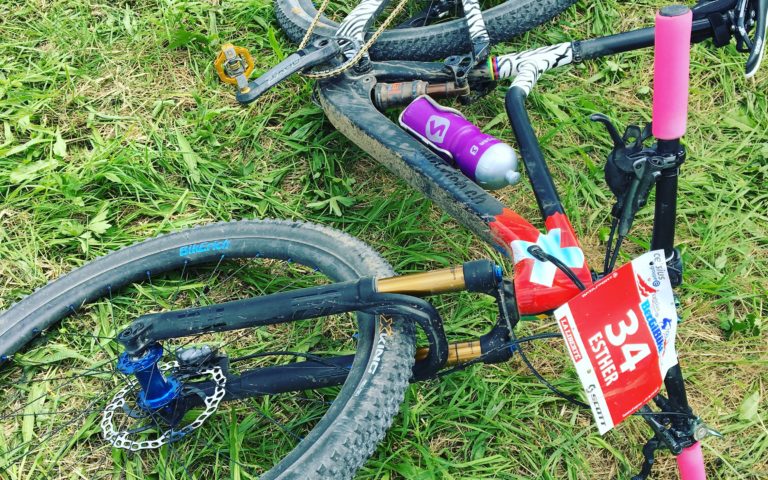 It’s been a long time since I last started at BergiBike in Fribourg. I had no idea how the track looked from a distant memory. The only thing I could remember was that there were a lot of meadows and that it had a lot of thick fog at that time.

This was one reason why I decided to start with my Fully, #zebra. I created the design of this bike myself and today I had the opportunity to ride the bike for the first time in the race. I was looking forward to it because in practice I’ve been riding it a few times and I really enjoyed it !!

Although not 100% fit, I was looking forward to the race, I just wanted to give the best and then look what would be possible. During the week I had to fight with sore throat and heavy cold. The cold was still there, and I had some breathing problems as well, so let’s see.

The weather was always forecast to be great …. at 8.00 clock we lined up at the the start in Fribourg. Interestingly, this is one of a few races where the start and finish are not in the same place.

The start was quite dangerous, especially as many riders feel like they’re already winning the race on this first kilometre. Unfortunately, that’s why crashes happen again and again, because the riding is so ruthless, no-one gives any quarter, that’s a shame!

In this initial high-risk phase, I always try to be out of the crowd, but that’s not always safe, especially when there are always changes of direction and the course narrows. Wide bars and tight lines are not the easiest. I survived this initial section without damage, but I hadn’t reached the lowest point of the city before my saddlebag had come loose on one side. I tried to fix it while riding, but I didn’t succeed. I had to stop for a moment and thread the Velcro back and fasten it. Then, full gas to chase after the women again. I did that relatively well and soon I thought I had taken the lead. Huber stayed on my rear wheel for a while, but eventually she lost contact.

From then on I rode my race, sometimes with men, sometimes alone. Since taking food on was quite difficult for Erich to arrange, I never knew exactly when he would stand, but it actually worked out worked very well. Also, I was never thirsty, whenever it was necessary, he was there at the edge of the track with a Sponser drink bottle in hand. THANK YOU!!

Today was something special for me.  I did not really know the track as I said, I had only in mind that we started with a long climb. The reality was this didn’t start right at the beginning. At first it went up and down pretty quickly. Then it went up for a really long time! Once at the top, we were rewarded with a great view and a thrilling descent on fantastic trails! It was really fun, and I was really happy with my decision to ride the Fully #zebra.

From then on, I just rode, and took what came along. Daniel then told me what would come next and together we rode on. The climb up to the antenna was a tough one, it was really steep!

After this ascent it went up and down towards the finish in Bulle! After 4:02 hours I happily reached the finish as winner with a margin of almost 6 minutes to the second placed woman.

Thank you, Erich, for the food and support !!

To the he organizers of the great track, thank you and a suggestion to have a think about the start in Fribourg. Could there be a way to reduce the possibility of crashes but keep the excitement?

Congratulations also to Ilona Chavaillaz and Verena Huber who took second and third on the podium.