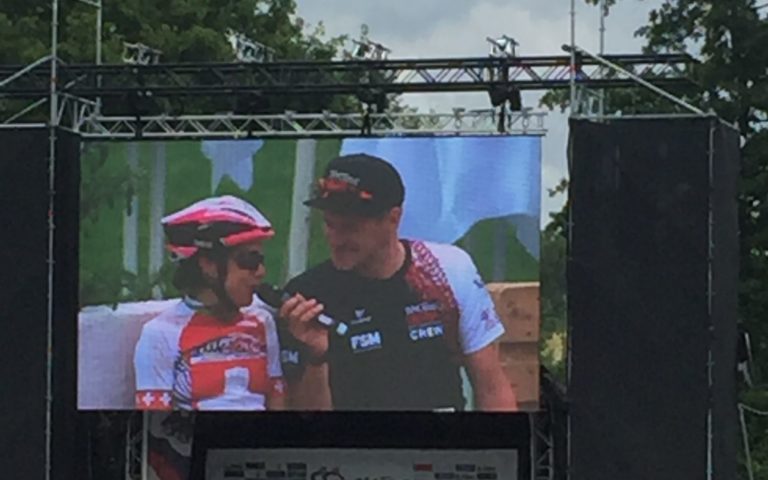 After a leisurely fried breakfast in Kirchzarten, we had a day of racing ahead. The plan was food, drink and bike preparation then at 6.20am, the warm up.

Immediately before the start was a little disorganised, things like who could stand where on the start area but a few minutes late, we were off. The men lined up for the German Championship on the Ultra course, but the women didn’t even though almost 30 registered for the Ultra….

Right from the off we were into the first climb, a real biter, it started gently but the more we rode, the steeper it became. After 17k we reached the high tops and the track undulated from this point. This is exactly the type of terrain that makes it difficult for me to hold a wheel on the men’s group. I let them go and was riding alone. I descended alone to Hinterzarten and pressed on around the lake wondering “what am I doing, I could have gone biking alone any other time” but at least I didn’t wonder where to go.

On the next climb to Altglashütten and further on to Farmwitte I caught the men again and my motivation was fired up once more.

The race pace was pretty fast, and my biggest challenge was to cover the flat sections in the wake of the men, which was sometimes better and sometimes less successful. I knew the longer the race lasted, the more competitive I would be.

From the 78K marker, another long climb kicked in and I made great progress. From the top of Knöpflesbrunnen things were going well. This was also a section that wasn’t kind to me and I had to fight. Finally, at 98K it was starting to go downhill again but this was a hard earned descent. I had adjusted well for this climb as it was still a good way up and on meadow, which didn’t roll easily.

When I reached the end of the climbs I wanted to take a Sponsor Cola Gum since it went steeply down…. I took some and got a Cola shock! I don’t know how many there were, but I would definitely get to the finish…. But curiously, my bike was losing air…..

Finally, down hill but what on earth was going on, the bike felt slack and spongy causing me to drop the pace a little. I didn’t have time to check properly either. I now had to be very careful in the turns to avoid rolling the tyre off the rim with 4k to the line.

But, it was still good enough to carry me home and take the win!

Afterwards, we were invited to the winners’ lounge for dinner which was great to be able to spend time talking with people from different courses.

It was incredible to see everyone here. From almost 5000 starters there were so many who had completed the course. There were people all across the stadium, laying around, eating, chilling, talking and stretching in the sun. A great atmosphere and different to the Swiss races. A real party feeling !

After a very successful race and a super win, may thanks to the organisers and their team. Have a nice week and enjoy the good weather !!