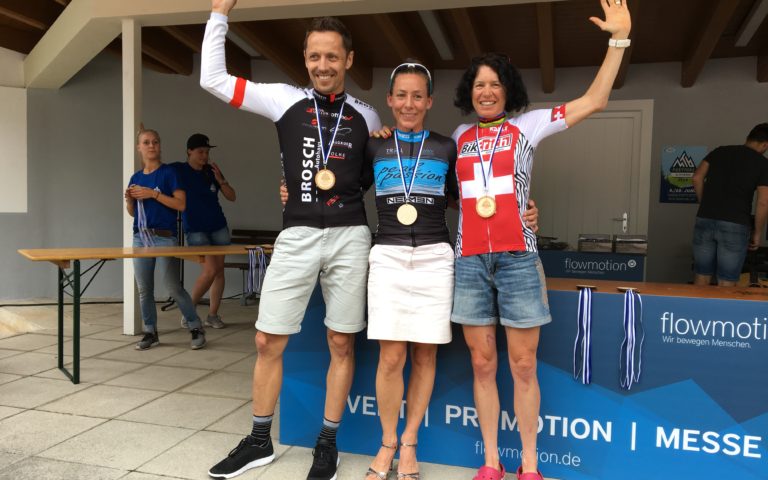 On Thursday evening, Erich, Chrigel and I drove from home with the goal of reaching Pians.  We stayed overnight and after some delicious dried meat in the morning, arrived at Achenkirch at 10am Friday.

I wanted to get on my bike and I thought I would ride the last loop of 25k. I should have checked the height profile before I set off…….. 10k into this ride I was on the track and it kicked uphill, and up, and up, and up…… It was nice, and I enjoyed the scenery but after 45 minutes I thought I had done enough. After all, tomorrow was race day. I thought I was up at the top but it wasn’t to be like that! It went up some more…. Perhaps to the houses ahead? Once I had reached these, I was horrified to see the track rising again and now my short ride to stretch my legs had gone on for an hour of solid climbing….

Should I turn around? No, I thought, there can’t be that much more ….. After riding three more turns and going around another corner I saw it climbed 3 further turns, so I had to ride through this! I changed to power saving mode, it was quite difficult, but it was over.

Finally up, there was first a short bumpy trail and again a little hillock high above the meadow! Then finally down, really steep down!! And worst of all, it was not flowing because it had so many kicks and holes that it was pretty dangerous to ride alone, so I pushed my bike down! But then it descended on gravel, really fast …. that was just perfect as I came back to the campsite as quickly as possible!

As a bit of compensation, we had a superb BBQ with a kilo of meat, corn and a fine salad…. Delicious!

We’re off. As soon as we left the main road the track went right, up steeply and I didn’t feel that my legs would be good today! I struggled up the first climb and had to let one or the other man go through!

Then it went downhill pretty fast, until we came to the first of the few trails in this race.  In this part we had to ride strung out in a row with the occasional push section. Next a really nice trail which was interrupted by a tunnel. Going quickly from full daylight, it was really dark, and I had to stop quickly to take off my sunglasses. I hadn’t the courage to drive blind, so unfortunately I had to let my group go on! That was a bit stupid, because afterwards it was slowly climbing and I had the feeling of not making much progress. I tormented myself, meter by meter up the rise. When it got steeper again it was a bit better and I was able to join two men who had caught up with me earlier.

Since I didn’t have my own food today, I had to go with the official catering. That was a bit strange. It was a pity that I had to stop if I wanted to fill up my bidon. But I was fortunate enough that “Sponsor” provided the food and I was able to drink my “Sponsor” drink!

In the first two 17k and 32k stations I rode through, or took only one cup, but then at 42k I really had to stop!

Something cool was that Erich and Chrigel saw me on the track because we happened to be in the same place at the same time. That motivated me a lot when I heard the both of them!! From then on, it was all little better 😉 I tried to stay with the group on the next gentle slope, which was successful and gave much faster progress!  At 42k I had to stop.  I filled up my bidon and on we went. Fortunately for me, it was the next climb and I was able to catch up to the men and even overtake some of them.

At 62k I stopped again, because I knew what was going to happen from about 70k and wanted to fill my bidon again for the last 1000hm, which I already knew about from Friday! So I rode in just under 3: 25h down the last mountain. So it was not going to be possible achieve my goal of 4: 30h !! I set myself the goal to drive to the top of the track in 1h (remember Friday I had taken 1: 20h) !!

To my surprise, it really went very fast and I didn’t even stop at the last food station, but took a cup of Sponsor drink! Now ahead was about 2km to the highest point! I rode and rode and actually smashed it in 1h !!! Wha – hoooo ! !!

Next, over the pasture up and down and then away, full bore in the valley !! I had Heinz in front of me, and I could follow him easily !! Even in the area close to the finish on the small detour up to the chapel, I held his rear wheel and sprinted in front of him and our companion to the finish maybe they have just let come through!

Erich and Chrigel were already at the finish, they rode really well for the 55km in 3:30h.. right? I’m proud of the two of you, well done !!