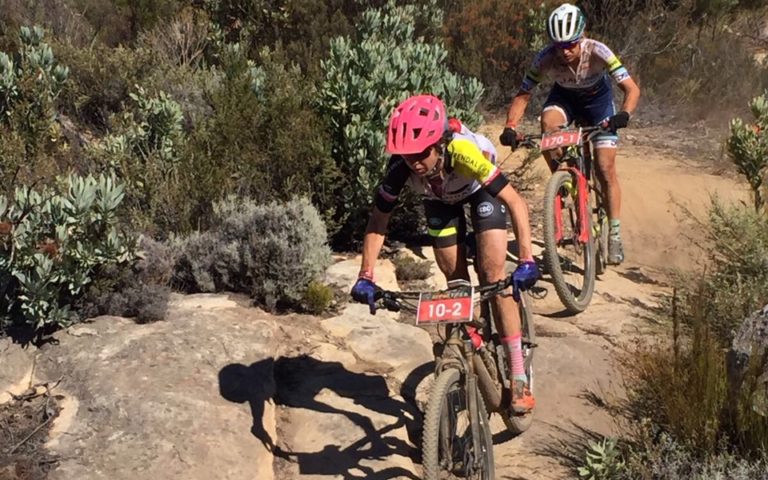 The new race season is just around the corner and I would like to bring you up to date, especially for those not following via on-line media.

Unfortunately, I don’t get that much free time from my school job anymore so I had to limit myself a little bit. Because of this, I decided with a heavy heart that I wouldn’t ride the Cape Epic any more. It couldn’t be reconciled with the school, the race takes place in March and there are no school holidays in this time. On the up side, it was nice ending with a win in 2017…..

But things changed out of the blue and I was given a letter saying I could take two weeks holiday as a Seniority gift! I didn’t have to think too long or hard about what to do with those two weeks! In autumn, I asked Max (the team manager of Meerendal), if there would be a place for me to ride Cape Epic 2018…. He welcomed me immediately which was a great relief. I then got in touch with Jeannie because she was looking for a partner for Epic 18…… again, perfect timing and luck as she didn’t have a commitment from another rider.
So, in 20 minutes of thinking time it was decided we would ride together again… What luck!

So, it was back to training again during the cold winter months here in Switzerland, but with one goal in mind, things get easier!

In my sports holiday, I went for two weeks in the heat of South Africa. I wanted to spend as many hours on the bike as possible and prepare well for Cape Epic. Erich was also there and besides the holiday, I managed a lot of bike time. I rode a few times with Jeannie and we wanted to start together last weekend, on the TankwaTrek.

SO that was that! Everything was organised and prepared and the Sunday after the race we were scheduled to drive to the airport and fly back to Switzerland!

But then, unfortunately, things took a nasty turn….

We finished the first stage in 3rd place, that was ok as I had some troubles, maybe I was a bit tired, but overall, we were happy with the start. Then the second stage, “my stage”, with a long mountain section. I was really looking forward to it, the pressure was off me because the first stage had gone so well, I was happy and felt very good.

We were on the course when it happened…. In a fast descent, I fell from a small hidden stone. I fell so violently I injured my thigh so badly I couldn’t ride anymore and this hurt more than the actual injury! Anyway, after initial first aid on the course I was collected by Paramedics and taken to the hospital where the injury was assessed and eventually sewn.

The race had started so well and ended so abruptly. Beside the leg, my arms, face and ribs were also beaten and bruised.

Sunday, we flew home. My leg hurt and I had to take a PAUSE. I couldn’t take exercise but luckily, I had school so I could hang out there. Now, a week after the fall I have put this behind me and I’m happy that my legs are still spinning! The wound is not quite healed but today I can hopefully pull some strings.

All being well I’ll be lining up on the start line of the Cape Epic in four weeks. I hope this doesn’t put me back as I definitely had other plans!

Also, since I continue as an independent rider, I’m very grateful for any support (see the attachment…)

Have a great week and a huge THANK YOU!