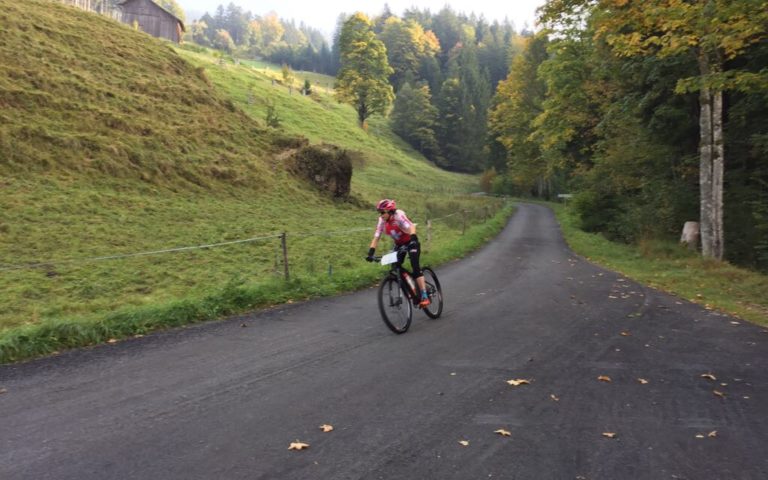 The Ironbike Einsiedeln is the last race of a busy season and I arrived at the start line a little tired. However, the race is always something special, particularly the ambiance and location. The start and finish is on the monastery square and there is a blessing from the priest before the starting pistol!

Finally, we were off. The sky was still threatening and according to the weather radar, rain was expected. We set off in moderate temperatures, 101km ahead with 3600hm of climbing. The first 8km was flat and the field took this as a final warm up before the climbing started.

The first climb took us to Etzel and into the forest descent so dark I couldn’t see! This was followed with another short climb and fast descent to Brandegg. In the first descent I could open a gap to my competition. I didn’t want to start too quickly as the course to the finish was long and the longer the race lasted, the harder the climbs would become.

I could ride at a good pace and could take in the view to the lake. I wasn’t riding alone for a while, but had male colleagues and this made the race more entertaining.

The next ascent took us over the Mülligassegg and Alp Grüeb down to Willerzell. This was another fast descent and I was able to match the pace of the men. I feel I could have gone quicker but it’s worth keeping a little back in reserve, not to crash out but ride safely.

From Willerzell the trail rose up to the Sattelegg and from there up to the Büel it became steeper still but I was feeling good. Next, a tricky downhill with roots and wooden features. These were wet, as they had been every previous year and not easy to ride. I realised it wasn’t going to get any better, so I just got on with it, relaxed and had fun.

I was still pacing the men which was good. From Euthal to Studendörfli or Unteriberg / Boden it was an interesting area and it was a lot easier to ride in a group! I wasn’t freewheeling here, I did my turn at the head of the pack!

Then the climb to the Spierstock began. The first section led up and across a meadow to Oberiberg. After that the way was paved until shortly before the Adlerhorst …. the last piece up to the Adlerhorst was hard won on the bike!

Next, 2.5km on flat and gravel to the Fuerderegg and the mountain prize on the Spierstock was still 4km away. Our group had fallen apart but I was still on the trail with Guido!

The last part to the Spierstock was hike-a-bike but after that, finally downhill. The descent to the Ibergeregg is a worry every time I do it because I have history here. It’s very rough and is covered in sharp stones. It takes both skill and luck to cover it safely. I tried to manage the risk and find a way through the rocks. It wasn’t just down but the trail included short steep energy sapping ramps. This really hurts!

I met Erich again on the Ibergeregg and he had a gel for me… I pushed this away, I needed to eat something! Flo gave me a new pair of glasses so I could see properly and my Dad was ready with a bottle.. THANK YOU! At the official feedzone I stopped for some food, I just needed something to bite on!

Re-energised again, I rode on down to the Holzegg. After this, another difficult trail to Brunni! I could ride the upper part but had to walk through the wooded section, it was just too risky to ride. The stones and rock were incredibly slippery and I was heartened that Guido also was off his bike and running even though I thought running was hard!

Finally we could ride again YESSSS! First of all, the trails went into the last two climbs. Initially, 4km up and I rode well, Guido couldn’t match the pace and I pulled him up the hill. Next a technical and rugged descent and I had to be very careful, Erich wasn’t ahead in front of the finish line. I had a record already on the downhill… now, its done… Next, flat to Egen!!! The last climb, 3km up to the top before the descent to Einsiedeln. Stay focussed… not too fast into the corners, ride fast but safe! The last kilometre passed through Einsiedeln back to the monastery square. Now, enjoy !

I had done it! After 5hrs 16m I rode across the line as winner, what a feeling!! Simply SUPER!!!!! A really great season.

I was especially happy that my Godchild Seline with Jael and Karin stood on the finish line and supported me… THANK YOU !!!!