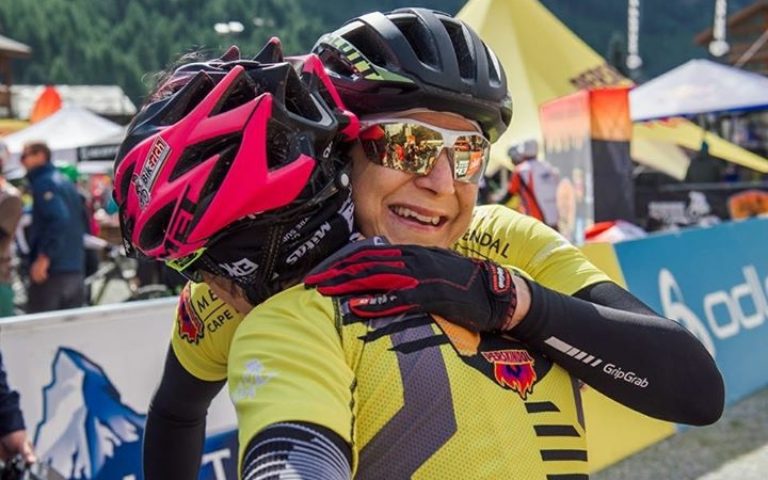 Just one more stage separated us from the long awaited victory in the Swiss Epic. This was the third attempt, the second entry had to be cancelled as my race partner needed to cancel and I couldn’t find a new partner at short notice. This year was the best chance. With Jennie I had an experienced racing partner to team with. Working with her on the Transalp where the climbs were long and steady but she really shone in the steep Swiss mountains. We had been able to extend our lead over Lüthi / Pirard consistently over 5 days racing.

Now, the last stage with 45km and 1900hm to cover with an overall leading margin of almost 19minutes, we lined up at the start. Again, very cold, but we had a climb over 14km to the Schwarzsee before the first potentially chilly descent back to Zermatt.

We got away well with a good pace from the start. Re rode up the mountain, with glimpses of the iconic Matterhorn through the haze. The mountain is so dominant and imposing. With its shape, position and size it seemed to give us more strength. We arrived as first women on the top of the initial climb and then off we went! I really had fun on the downhill and tried to pick out some good lines for Jennie.

We rode down with a little trepidation, under no circumstances did we want to take a risk, fall or pick up a puncture or mechanical. We were too close to taking the win!

Lüthi / Pirard were pushing hard at this point and we let them pass as they were faster on the downhills.

“Take it easy” I said. I didn’t want any stress as this would lead to mistakes. As such we arrived in Zermatt 2mins behind the leading women, Lüthi / Pirard.

At this point, I was mentally very tired and when the commentator asked questions at the feed station I had little to say. I really had to dig deep to find the motivation for the second climb. I forgot to keep checking for my partner and Jennie had to whistle me back. I took a bit of time to gather my thoughts and we went on, together. I couldn’t see Lüthi / Pirard.

This was a worry. Suddenly, I sensed the time margin slipping away and a real sense of panic. Could it be possible that we would let victory slip on the last stage?

I was still trying to push on and recognised on a section that we had descended a previous year. It was just steep, but critically, there was Lüthi / Pirard approximately a minute ahead.

We were tortured by steep ramps. An arrow pointed right… had we done it? No… again, it was up. Another turn, would it go down… NO… up yet again! With only 10km to the finish and we were STILL climbing…. Another hidden summit… my head was tired, I just wanted to cross the line and finish.

Finally, we made the top, well almost. First there was a traverse before the descent. The trail was cool, technical with many holes which ere a worry. I rode steadily which helped with the lines. The most stress was caused by flow riders passing us (they had used the gondola for the ascent so were quite fresh).

After all this, we made it back to Zermatt, feeling a bit numb. I asked Erich who was close to the finish, whether we had done enough to take the overall win.

YeeeeeHaaaa! We managed to take the Swiss Epic after the Tankawa Trek, Cape Epic and Transalp in the same season. What a success story ! It seems we really were a dream team.

For Jennie and me to be so successful, we owe a big THANK YOU to all our supporters that have stuck with us this season.

Meerendal, chiefly Herman and Aletta for financial backing and support

Max, for your organisational assistance and media presentations, so we could concentrate on the racing.

Erich, focussed mechanic and carer at all 4 races, a huge THANK YOU! All this and closing the BikeErich shop for the duration of each race. A huge THANKS to our patient customers.

Nicole, Hanna and Craig, the masseurs making sure we were fit for the next stage. THANK YOU!