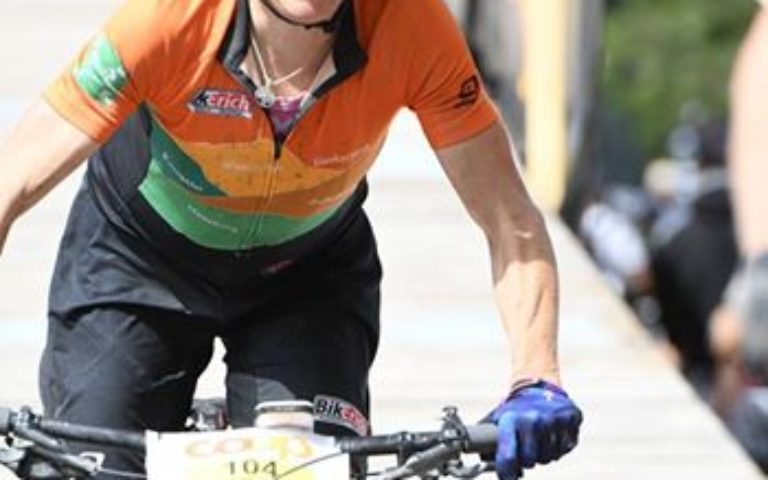 Before the start of this race I was a little nervous. After my XCO racing time, 137km on a bike was almost unimaginable. Taking my result from the Eigerbike Challenge makes me a little more confident, but still, how would it go on the day? It’s important, not just for the race but it was the Swiss Mountain Marathon and I really wanted to get this title. In addition, I knew that Ariane had been in the Engadine area for two weeks whilst I had been at home during the time I should be training.

At the end, we stood side by side on the start line. Whilst I was still chatting with Cornelia, there were no words with Ariane except a brief “Hello”. Then, the starting pistol and the race was neutralised through Scuol. Just past the bridge on the climb to Costainas, we were released and the race was on.

Slowly, the field dragged themselves upwards. Small groups naturally formed and soon, we were four women riding together. (Two Austrians, Angelika and Christina with two Swiss, Ariane and I). It was a completely different set of circumstances from the Eigerbike Challenge, where I rode alone for much of the race. Even when I upped the pace a little, I couldn’t drop the others and this was a little unsettling.

Was Ariane so much stronger than two weeks ago? Was I having a “bad” day ? Mental strength was everything, the race was long, pace was important. I didn’t want to go crazy but save my energy for kicking later. So, we rode together in the valley, first on tarmac, then through a barren section before passing S-Carl and the first spectators cheering us on.

From this point, the landscape opened and was beautiful, the sun bathing us in warmth and light. The last 3km to the summit led into a trail and was very different. Ariane attacked just before the start of this section and I had to fall in line behind her.

This wasn’t too bad, but was an indication of our rivalry. Neither of us were giving an inch to the other. I couldn’t leave it like this and just before the descent, attacked and got ahead. It was a broad trail initially and Ariane was pushing hard. She took some risks and I listened to reason and tucked in behind her again. I couldn’t risk a fall at this stage.
Further down, the surface changed to gravel and I was passed by Christina which was frustrating and a surprise. Suddenly, we came to a very sharp right hand turn which we almost missed and brought us to a standstill. When we set off again, the question was: “Where was Ariane?”

I was amazed, she was nowhere to be seen. My two fellow competitors were also baffled and the only explanation was that she had missed a turn and gone wrong.

At the bottom of Münstertal, Erich was waiting at Fuldera and I asked about Ariane, was she through ahead of me? “No”, ok, well, good for us! We climbed together to Döss Radond, an ascent of some 700m. Angelika asked curiously, how I was going and I noticed that my legs were not as good as two weeks ago… or was this in my mind….

In any case, we rode with a good rhythm, pressing on. After Val Mora, we continued to Alpisella and the most scenic section of the route. This was just before a more dangerous downhill into Livigno. Then a flat loop through loads of walkers, hikers and bikers to the climb at Chaschauna!

Thankfully there had been an engine flattening the path for us, and soon it was getting tough again. The Chaschauna is really brutal ! As it gets steeper and steeper, hairpins after hairpins, I stepped up the pace. Legs burning, back aching…. It seemed to never end. Luckily, Angelika was ahead of me and this was all the motivation I needed to press on.

We reached the top together and this was to continue for the next 57km to the finish. The highest part of the descent was steep with tight corners and I crossed my fingers that the brakes would stop me. Then, across Alpine Trails before another fast gravel section. I looked back. Where was Angelika….. she was missing!

I decided to pace myself. It was constantly undulating and this was deadly. Soon, she was back with me and we rode together towards Zernez. Suddenly on a left turn, her wheel washed out and she slipped off. I stopped and asked, “was she ok and could she continue?”

Even though she had cut her elbow, we were back on the bikes and racing.

At Zernez, a small climb, more food from Erich, then on again. In this section was another group and we could save some energy for the last 20km of the course on the other side of the valley. From Lavin it went up again to Ftan. When you thought, you were at the top, there was always another climb. This time I knew this section and could adjust to it. I recalled my first time here when I wanted to die!

Finally, the descent to Scuol. Full attention and concentration needed. The downhill was a scooter track with many curves and gutters as well as loose gravel. Executed skilfully, it went down fast to the finish. Over the bridge, I settled with Angelika in front, so she crossed the line as race winner, myself, second.

Importantly, this second place made me Swiss champion ! During the interview at the finish, we were told that we had made a new course record, taking an incredible 12minutes of the previous fastest time.

What a race ! We also jointly won the Mountain prize on the Chaschauna. We reached the summit together and as there was no official timing, we shared the prize. Thanks Angelika for a great race and congratulations on the superb win.

Thanks Erich for your care and preparation
Thank you to the organisers who made it possible to have a Swiss Mountain Marathon.
At the end, I was awarded the Leader Jersey of the Garmin Bike Marathon Classics.

This is a title I really had to earn over this long and testing course, but I’ll wear this Jersey with pride!