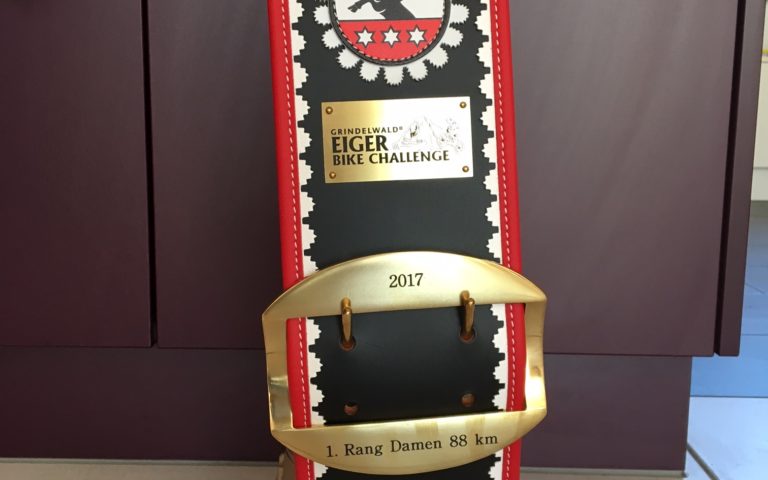 After a short and very packed week including lots of sleep, I had to somehow find the rhythm after being back from Columbia. There were two days of school and education as well as the preparation for the start of school on Monday… after we closed the shop, we travelled to Grindelwald.

Unfortunately, on Saturday morning, I couldn’t get the planned massage I had looked forward to all week and my body was feeling tired. I was expecting a tough fight with Ariane Lüthi and Cornelia Hug. Not a good omen and on top of this we were caught in a traffic jam and I could hardly sit in the car. Despite this, we somehow arrived and I managed to get my starting number.

The alarm went off at 4:15am, time to get up and have breakfast with a focus on the 7am start.

Just before the start I had a short interview with the team from SRF TV as they have come to the race to cover me and record for a later segment on Sportpanorama.

So, to the start line and we were off. I didn’t want to get provoked by the competition and get crazy, but ride may own race. Up to the Wetterhorn restaurant things were still fairly moderate, but the men were faster and pulled away. I was on my own. I looked over my shoulder and couldn’t see anyone behind at all! After this, I rode a lonely race.

After a little while I reached the First and found myself starting a tricky descent. After crossing some small streams the speed picked up on gravel and tarmac towards Bord. Here I was fed by Erich for the first time. Going on, it was undulating towards Busalp, turning right, making a detour across “Feld”. This year I did well on this section and I was up ! After a short slippery section, we continued to alpine meadows leading to faster gravel towards the valley.

After a series of up and downs, the steep climb to Bord was now on the program… and it was really steep ! It was at this point I won the first mountain award. After that, the majority of the route was heading downhill, but there were constant climbing biters that hurt.

Next, I reached Grindelwald Grund and had to turn left to Kleine Scheidegg, but importantly, I was still riding ahead and alone!!

The beginning of the next climb was a pleasant ride, the slope suited me. My stomach was rebelling a little and I had to force a Sponser gel down, not what I wanted at this moment. I couldn’t drink either. At every meal I had soup, so I had enough salt but in this competition with the gels, I needed something “not” sweet !!!

The climb was steepening the more distance I covered. I managed to overtake 3 men, so either I wasn’t slow or they were brutally broken !!!! I got word from Erich that he estimated I was 10 minutes ahead but was that actually the case? I went on, thinking the faster I go, the faster I’m up and finished.

Finally, I reached the hike-a-bike, here we had to climb straight up a meadow, really steep and not cyclable. But, I did know that when I had reached the top it wasn’t too long to Kleine Scheidegg and I could win the mountain prize!!

With three slightly longer ascents, the route descended towards Grindelwald Grund and from here, the last climb to Grindelwald Dorf.

Thank you, Erich, for your support and care during the race.