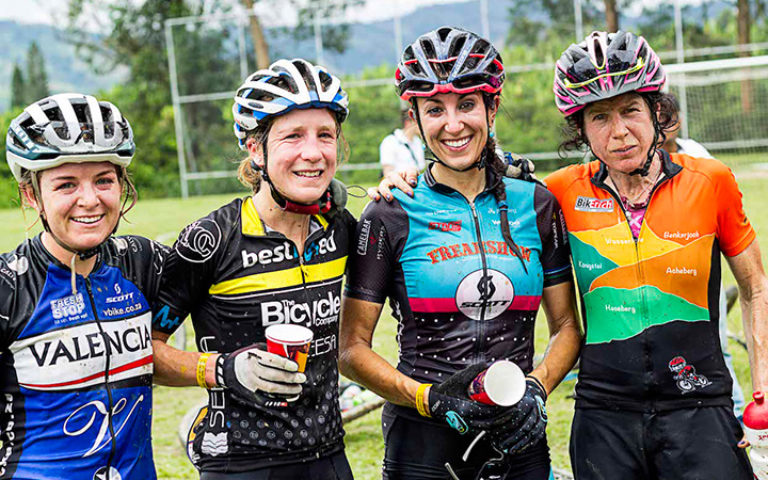 Today was very relaxing as the start was at 8.30am. Once again, we were proud to be able to start in the Vulcano jersey. I was looking forward to the short stage, it was 29km and 900hm. Short and sharp ! It would be nice if we could win this stage as I had calculated that we could have been only a minute behind the leaders …. But for the 60minute penalty, that is….

The first of the two climbs, we had to give up the lead as Sonya and Amy were already ahead and it didn’t look like we could break them. Catherine was fighting with an XCO pace so I had to take care of her…. The singletrail downhill was brilliant and a pity we no longer had such amazing trails to come. This trail was dominated by the two leaders as they were faster than Catherine. At the bottom, we had to cross the main road before the next ascent. The first ascent was steep but this was steeper again, but fortunately on tarmac. We were always followed by sports fans when riding. I think the Columbians are real sports lovers, very enthusiastic and friendly but unfortunately the least English speaking…After a short trail, we rode the last 8km through the city to the finish. On the last section, I had a fright as a companion snagged handlebars and I was lucky not to fall. Finally, we were able to finish the stage in second place and importantly, second overall, despite the 60-minute penalty which is a great result. Summary. It was a great week. A great race that demanded a lot of perseverance. The ascents, often long and steep, the descents mostly fast and steep ! The scenery was incredibly beautiful, the colours intense, the air pure (outside the city)…. The thin air at altitude, many dogs, horses and cows. The houses, friendly and enthusiastic people along the way. The race was small and compact. The fellow bikers were cool and many friendships were cemented. New people, exciting competitions…. The food was a bit monotonous…. Rice, pasta chicken and fish… morning, noon and night…. Joy, laughter, frustration, tears, comfort, exhaustion, euphoria….. the different moods of the week. The many good memories will stay with me for a long time. #BeALegend