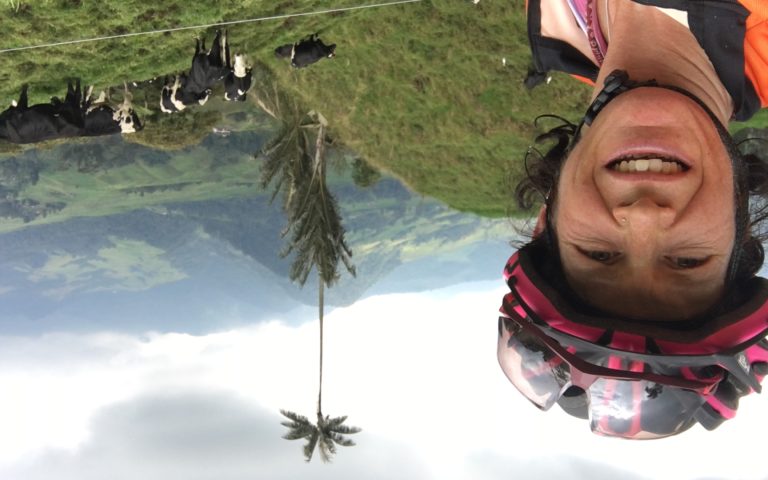 After a long journey and lots of hangovers at various airports, I arrived at the hotel in Manizales on Thursday morning, 1:30am!!! In Panama City, I almost missed my flight…. I had to kill 5 hours and was actually, very tired. I decided after a lot of walking and sitting, to lie down on the floor at the gate because I would be sitting in the plane later. I never thought that I would fall asleep but that actually happened!!! Suddenly, I was woken with a person shaking me, asking if I wanted to go on the plane to Pereira. Yes, I did want to go !!!!

First impressions: very confusing as I didn’t understand the language and very few people speak English. I felt lost at the airport in Pereira, something of a problem with the luggage and getting through customs. It was much easier when I could read my name on a piece of paper and a big weight fell from my heart. I was welcomed very warmly by Diego. Almost at the same time, 4 other bikers arrived (along with two Songo bikers from SA). When we had stowed all the luggage, the three cars drove for an hour to Manizales. On the way, one car was held by the police for a control check. We finally arrived at the hotel, very tired so straight to bed.

At 6:30, I was wide awake again, so off to breakfast then build my bike. From somewhere in my mind, I looked at the room key and realised I had to check out today !!! I asked Carolina to see if I could check out now, build my bike in the next hotel, then join with other bikers for a tour at 11am. In all reality, I’m quite fast building the bike but this time took a little longer and shredded my nerves. I built the dropper post, got it mounted, the remote lever decided to hate me, but finally it was complete and I was off.

Escorted by two policemen on mopeds, we rode out of town and up the mountain. After riding uphill for what seemed forever, we turned after 75minutes climbing only to go back the same way !!! After two hours, we were back in the hotel.

The next major challenge was to order food at the hotel restaurant since people speak little English. With the menu in Spanish, the surprise factor at what would arrive on the plate was extreme!!!! Since Sonia is a vegetarian, we went off to a veggie restaurant and okay, I have to admit it was very good. I did wonder though why make a tomato salad with tofu not mozzarella?

Afterwards we went in search of a bike shop, always with the mobile phone at the end of our noses. This was important in getting us back to the hotel, I couldn’t have managed without it !!!

Next challenge, getting money from a machine. After two failed attempts, I asked for help and someone heard the call. It worked and I had tens of thousands of pesos in my hands !!!

Later at night, we took a taxi and oh, what a ride. I wasn’t sure that I would survive.. it was worse than a roller coaster and I was glad to arrive safe at the destination. The food was great, including the surprise element!!!

Finally, I could close my eyes in bed.