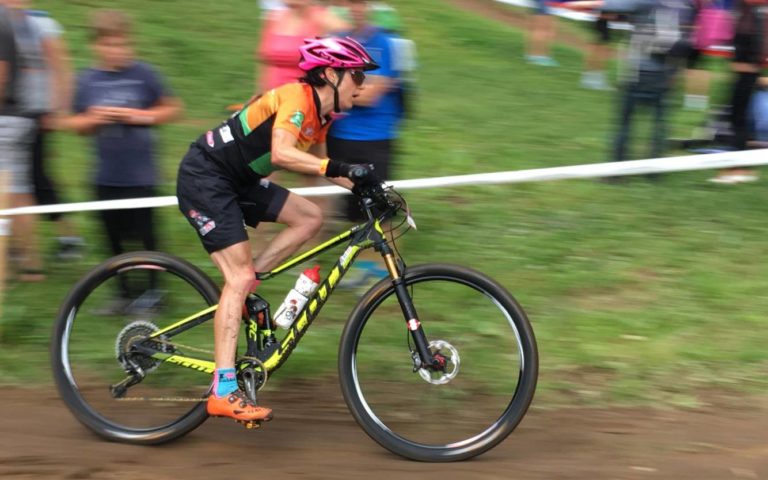 Even though it wasn’t in the original plan, I have raced in Lenzerheide, here is the report.
After the youth festival and several drink receptions at the end of the school year, I could start my World Cup Lenzerheide adventure. But why “adventure” you ask?

Since I originally didn’t want to race any more World Cups, the race in Lenzerheide want originally part of my plan. Erich had already planned and excursion with colleagues to Saalbach the same weekend a long which ago. So, I had no support or driver to help with the caravan journey to Lenzerheide. The bigger problem was Erich was taking the car and our VW bus didn’t have a tow bar for the caravan. After a lot of deliberation on what to do, I decided to drive with the caravan. Fortunately, I could borrow my parent’s car, so a big THANK YOU to them.

I started in Küttigen on Thursday, in a strange car and for the first time by myself driving the caravan. At first I was a little unsure, but as the kilometres ticked by, it became easier. I finally reached the camp site at St. Casein in Lantsch and they helped put the caravan in place and I could finally settle down.

I went along to the track but was stopped a couple of times as I didn’t have a start number. I hadn’t had the opportunity to get my number because I was there early. The track had changed a little but I was riding the “A” Lines and was feeling fine, so in good spirit for the race.

I went with Janis to the track on Saturday, he had trained there all week and was a great help with line choice. It had rained overnight and that made the course very different. It was slippery and the tree roots were very unpredictable which didn’t play to my strength. It was good to be able to practice in these conditions as the forecast for Sunday wasn’t just “dry”. I was still able to ride the “A” lines in these conditions so I returned to the campsite feeling satisfied with the day.

Saturday evening was sunny but with huge thunderstorms into the evening with a forecast of more storms Sunday. Since Erich wasn’t with me, I was fed by Wilfried (Githas’s father), plus, I was able to warm up with the Scott Team, so arrived on pole position for the start of the race at 12:15.

We were off, the road with had looked quite wide suddenly became very narrow. The start group was really crowded and I was unbalanced by another rider. Someone else rushed up the road and cut in just in front of me. I found myself quite far back in this chaos and overtaking was difficult, so I was in line a fair way back on the first trail. At the first tree roots it was madness with everyone together and we had to run with the bike.
Back on the bike and pedalling, we went up the ridge, over the river and into the Dual Slalom through the forest towards the finish line where there was an extra step this year. At the end of the first lap I was 51st, not so good.

On the next lap, the field had spread out and there was more space. I could make up 10 places. The track was really tough, the tree roots were so slippy and unpredictable. The track needed a lot of concentration! I also noticed I wasn’t producing my usual full power. The air was a little thinner and after arriving Thursday, it wasn’t quite enough time to acclimatise properly.

I had to be mega focussed not to make mistakes, the roots would catch you out without warning. From place 41, it was more difficult to move up and I made one or two small errors that disrupted my rhythm.

Suddenly, we were told there were three laps left to ride, but I knew I had done 3 out of 7, how does this work? The Commissars had shortened the race by one lap because of the weather, so we were on a 6-lap race, not 7. I think it was on this lap that I could gain a place, but my front wheel slipped away on a root. This really hurt my knee and I had to pull myself together again.

I was thinking about my position. I wasn’t willing to risk everything in this race. Besides, I have the Transalp in a week’s time. I rode the jumps but changed tactics to take the chicken lines over the rocks. In reality it wasn’t slower, it didn’t make much difference.

As I rode through the finish line on lap two, the commentator was playing with the crowd, practicing for the leading riders. I crossed the line with a wave of applause and I knew it wasn’t for me, but it was a very cool feeling. I collected a lot of strength from this and rode quicker, making up two more places.

Overall, the race was not my best, I fought hard and enjoyed it despite conditions, the slippery roots and hurting my leg. The crowd were great and I was really motivated as people were shouting my name, THANK YOU! On reflection, I think this will be my last XC World Cup. I think the future for me lies with Stage Races and Marathons.

At the end, I came in 36th, behind Leumann and Gantenbein, so actually, not too bad considering I ranked 51st at the beginning of the season. Clearly, I would have preferred a higher place but I knew the course and the slippery track didn’t suit me, so all in all, I’m quite comfortable with the outcome.

So, its looking forward to the next races and the Transalp, which starts next Sunday.

@ Wilfried for the support before and after the race, that was a great help plus, collecting my things from the campsite.

@Frischi, for being able to ride in with you!

@ FANS on the course for the support, it was super cool!

@ Janis for coming to the track with me on Saturday

@ my two camping neighbours for helping me attach the caravan to the car!

Have a great week…