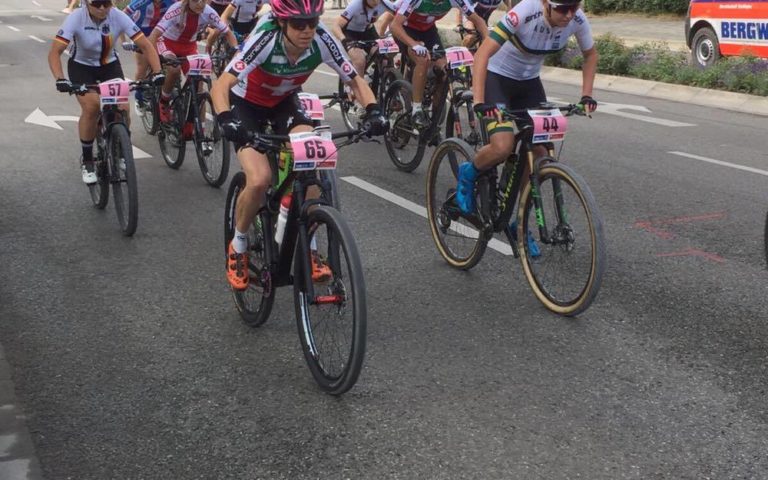 The Marathon World Championship in Singen had attracted a very strong range of competitors, probably the most competitive group since the very first race back in 2003. This may be due to the nature of the Singen course profile, open racing with short ascents being a feature. This probably gave the hope of a podium for a wide range of competitors as well as their World Championship title ambitions. It was very difficult to predict in the run up to this race, what would likely happen and this made things very exciting!

I don’t really know where to start this report, I am already home again but have mixed feelings about my sixth place but I will tell the story.

Initially, in the morning I was woken by the sound of rain on the caravan roof and I jumped to close the windows. I had not expected rain and in the caravan, it always sounds worse than it is but I was still surprised. At this point, there was still over 3 hours to the start so things could improve.

I made breakfast, prepared my race bottles then rested again. Somehow, I didn’t feel 100% but couldn’t put my finger on the problem. Was it pre-race nerves or was I not quite in the moment yet?

Since I haven’t raced a lot of marathons recently, my ranking placed me at 65 out of 77 starters. What I did know however, with 80km ahead there would be plenty of opportunities to overtake.

The race in Singen is quite unique and special. It has very few climbs and covers a wide range of surfaces needing a very tactical approach. This was very clear on the lead in to the race, riding off the front for the whole 80km would be impossible. Exactly what these tactics would look like was also a challenge as there were a lot of unknown riders in the field. Decisions would have to be made in the moment, whilst racing.

Without a neutralised start, it was a fight immediately. For the first few metres, there was a lot of competition in the pack and I had to be wary of getting caught up with other riders and involved in a fall. I managed a fast, clean start and was soon part of the leading group. This was important as out front, less could happen as a result of other rider’s actions.

We had a small round of 31km which quickly split the field then a second larger round of 49km. The leading group was 15 – 20 riders, this is still quite special for a MTB race. Although I had planned to be well placed about 15km before the finish, it didn’t work and found myself on the end of the group. Now was the time to be patient and stay tuned. Riding in this way, the field became very strung out.

In the middle of the second section, I managed to pass several riders and just before the highway bridge, took the lead. On the last steep and loose climb I was on the back wheel of Langvad and this gave me a lot of confidence for the second round. We would have to tackle this climb once more at the end of the race.

I went into the second round in the leading group. Being jostled or hit by other riders was a little unsettling, unnecessary and dangerous. Despite this I came out of the round well and not too far back, my confidence was building. I wasn’t as bad as I thought I was feeling before the race. Then on the singletrail, 15km before the finish, I was at the front of the leading group which I didn’t expect and was a great bonus.

I was surprised by the speed of the pack and was holding a position in the middle of the field, better placed than the first round but not exactly optimal. I was trying to stay on the rear wheel of Dahle when the race took another unexpected turn.

Neff, Kohlmann, Spitz and Stenerhag were ahead of Langvad when she fell. Dahle and I had to wait, Langvad got back on the bike without letting us pass. When she was back up and riding, she was so fast I wasn’t able to follow her and had to press on, alone, I couldn’t close the gap.

Finally, I could see Stenerhag ahead and I gave everything to close on her. We went into the last ascent of Plöden Hill together and the huge roar of the audience carried us on to the finish. This was very cool and THANK YOU for this boost.

At the line, I managed to take 6th place ahead of Stenerhag by 3 seconds and 1.10 minutes behind Langvad. I am relieved, but somehow can’t pigeonhole this result. I’m happy with the race, just not the result, I had fancied a podium and medal. On reflection, I was just not agile enough and I also, not 100% fit with my head in the wrong place. This is probably the reason as well as being just too tired.

Langvad won in front of Spitz and Dahle! CONGRATULATIONS !!!!!